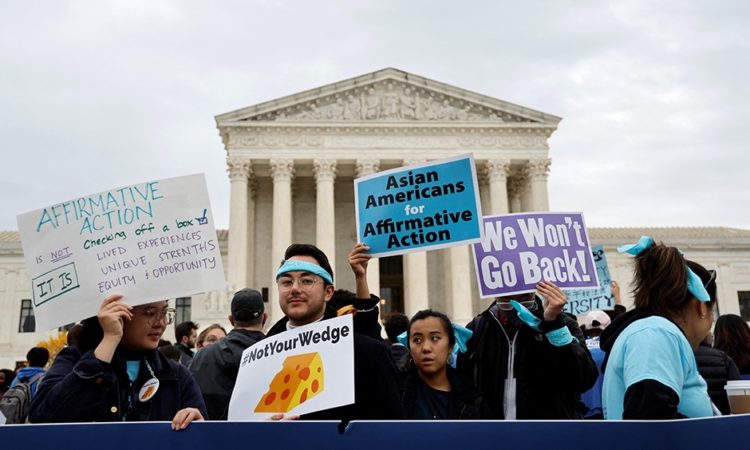 Macalester, Carleton, St. Olaf, the University of St. Thomas, and St. Catherine University all signed on to amicus briefs in support of affirmative action.
By Ana Radelat
November 03, 2022

WASHINGTON — The Supreme Court’s decision that consideration of race in college admissions is unconstitutional would upend the way colleges in Minnesota and across the country consider applicants.

The justices on Monday heard arguments in two cases that challenged the consideration of race to foster diversity in the application processes of Harvard and the University of North Carolina. If the conservative-leaning court rules that these programs are unconstitutional, many universities, especially elite universities like Harvard and Yale, say they would see a decrease in the representation of Black and Latino students and an increase in students who identify as white and Asian.

The University of Minnesota-Twin Cities also considers race – and ethnicity – in its application process.

“At the Twin Cities campus, we have used a decision-making process based on the holistic review of applications for admission for more than 15 years to achieve our goal of enrolling academically prepared students with diverse backgrounds,” the Office of Undergraduate Education said in a written statement. “We define diversity broadly, encompassing a whole host of factors including economic background, geographic origin, age, gender identity and expression, religion, ethnicity, race, sexual orientation, abilities, talents, and beliefs.”

The university also said, “Regardless of how the case is decided, we remain committed to an admissions process that carefully looks at everything a student brings to our campus community and that continues to support student success.”

At other campuses, factors other than the application process play into diversity. For example, the University of Minnesota’s Morris campus is diverse in part because the school, built on the site of a former boarding school for Native American children, offers free tuition to American Indian students because of an agreement made when the property was transferred to the state in 1909.

According to Harvard’s brief, about 40% of all American universities – and a higher percentage of elite universities – consider race in some form during their admissions process.

But the Minnesota State system – which consists of 26 two-year community colleges and seven universities – does not consider race in its application process.

“We don’t expect that a ruling by the court on this matter would have any impact on our admissions decisions as the colleges and universities of Minnesota State do not use race as a criterion for admission,” Minnesota State spokesman Doug Anderson said. “We are proud of our position as the most diverse higher education system in Minnesota and being a beacon of opportunity for our indigenous communities, communities of color, first generation families, and families from across the socio-economic spectrum.”

The Supreme Court’s six conservative justices, a majority on the nine-member court, asked skeptical questions about the value of educational diversity.

“I’ve heard the word diversity quite a few times, and I don’t have a clue what it means,” said Justice Clarence Thomas.

He also said he’d heard similar arguments like the ones posed by the lawyers for the universities in defense of segregation.

The cases the justices heard on Monday were initiated by an organization called Students for Fair Admissions, who had challenged the admissions policies of Harvard and the University of North Carolina. Students for Fair Admissions, a group that describes itself as “dedicated to defending the right to racial equality in college admissions” and that was created by Edward Blum, a stockbroker and conservative activist who has backed other challenges in the consideration of race in undergraduate admissions.

Students for Fair Admissions is asking the Supreme Court to overturn a 2003 ruling known as Grutter v. Bollinger, what determined that universities and colleges may consider race in their admissions processes as part of their efforts to achieve diversity on campus.

The challenge to Grutter argues that the U.S. Constitution and federal civil rights laws bar any consideration of race in college admissions. They say a landmark 1954 ruling Brown v. Board of Education, which struck down racial segregation in public schools, determined race should not play a role in college admissions.

Meanwhile, attorneys for Harvard and the University of North Carolina argued that overturning Grutter would have sweeping consequences outside of university admissions, affecting the use of affirmative action policies in U.S. businesses, the military, the scientific community and other arenas.

Barring the use of race as a factor in college admissions would have “profound consequences” for “the nation that we are and the nation that we aspire to be,” said Solicitor General Elizabeth B. Prelogar during arguments in the Harvard case.

When pressed by conservative justices, the attorneys representing Harvard and the University of North Carolina could not say when affirmative action programs would no longer be needed on campuses.

Other Minnesota colleges weigh in

The case drew dozens of amicus, or “friends of the court,” briefs in support of either side, including one from the Biden administration in support of the Harvard case.

Several smaller Minnesota Colleges, including Macalester, Carleton and St. Olaf colleges joined a friend of the court brief led by Amherst in support of affirmative action policies in enrollment. And the University of St. Thomas and St. Catherine University also weighed in with a separate brief led by Georgetown University and supported by dozens of other Catholic colleges.

The Catholic schools said they “respectfully submit this brief to provide the Court with their unique perspective as to why both their academic and religious missions require discretion to consider applicants’ racial identities alongside a variety of other factors in admissions decisions.”

Meanwhile, dozens of members of Congress, including Reps. Ilhan Omar, D-5th District, and Betty McCollum, D-4th District, also filed an amicus brief in support of Harvard and the University of North Carolina.

The lawmakers’ brief said there has been a “resegregation”  of K-12 schools since Grutter was decided nearly 20 years ago, resulting in achievement gaps between white and minority students that affect their ability to enroll in the college of their choice.

“Without the ability to consider race, the challenges that both UNC and Harvard face in achieving the compelling interest of creating a diverse student body will become even more severe, and their First Amendment freedoms to foster diversity on campus will have been undercut,” the lawmakers’ brief said.

The case heard by the justices on Monday is just the latest in a string of challenges to college affirmative action policies since the 1978 case known as University of California v. Bakke.

Allan Bakke, then in his 30s, was rejected twice when he applied to the University of California-Davis medical school. He sued the school saying its decision to set aside a number of seats for minority students discriminated against him as a white man.

The Supreme Court agreed with Bakke but said the use of race as a factor in admissions was constitutional if it was part of the overall evaluation of an applicant.

Bakke graduated in 1982 from the University of California-Davis and became an anesthesiologist at the Mayo Clinic in Rochester.