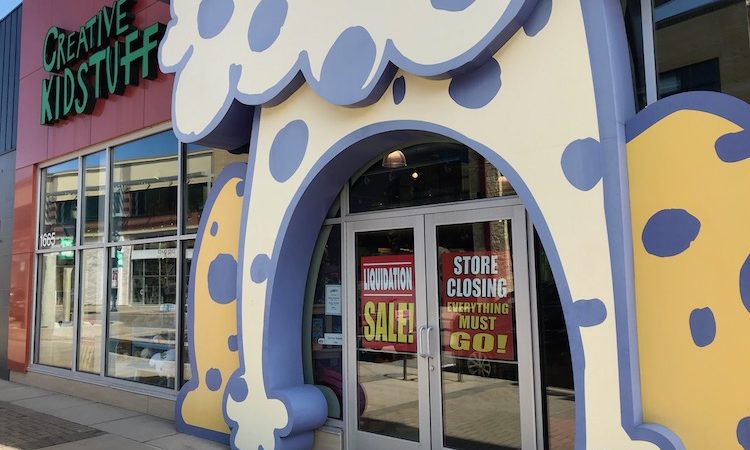 The Creative Kidstuff liquidation sale started Wednesday and is expected to run through June 30.

What Is the Future of Neighborhood Toy Stores?

Do we blame Amazon for the death of Creative Kidstuff or diminishing play time? Retailers and toy makers talk about how to compete with screens.
By Allison Kaplan
April 07, 2019

Even as prices were slashed this week for Creative Kidstuff’s going out of business sale, customers streamed into Hopkins-based indie toy store Kiddywampus, intent on paying full price.

If any good comes from trusted community retailer Creative Kidstuff closing all six stores after 37 years, it seems to be serving as a wakeup call for both the industry and consumers.

“We're deeply saddened that Creative Kidstuff is closing,” says Dan Marshall, co-owner of Mischief Toy in St. Paul, which specializes in games, comics, and memorabilia for older kids. It’s the follow up to Peapods Natural Toys, which he and his wife Millie Adelsheim operated for 16 years. “We've shared the Twin Cities with them for over 20 years and they've always been the benchmark of customer service and the overall shopping experience. They were of national importance as an independent toy retailer. Just about every customer is talking to us about it.”

Saldanaha spent the week talking to other independent toy retailers like Marshall about how they can band together to support each other. “We need to create a strategy to let people know we’re out here in the marketplace and make sure it’s a supportive network.” Saldanha says a group of 25 local toy stores, manufacturers, and product reps that belong to the Association of Specialty Toy Retailers are in the process of creating a regional group with the goal of working together on marketing campaigns and possibly even joint orders.

But this time, it’s not only the disappearance of another local retailer that we’re lamenting. Creative Kidstuff’s struggles, on the heels of industry giant Toys ‘R Us going under, is a statement about play becoming a tougher sell. The competition comes from iPhones and Xboxes, but also from longer commute times to school and more intense youth sports and art classes and language camps and families prioritizing experience over stuff.

“Our world has changed, our society has changed,” Creative Kidstuff CEO Roberta Bonoff said when we spoke earlier this week after she broke the news to her 99 employees. “We eat out more than ever, kids have cell phones, we spend more on lessons and less on play. We’re going to have to choose how we’re going to raise our children, and how much importance we put on play.”

Study after study points to the importance of play in a child’s development. “The old saying is, play is the work of children,” Dr. Benard Dreyer, the director of developmental and behavioral pediatrics at New York University School of Medicine and a past president of the American Academy of Pediatrics, said in a New York Times article last year. “Play is the way they learn and the way they develop. It’s important to understand how all of us, and especially parents, can encourage play.”

Screens may be a symptom of over-scheduled kids—a brief distraction between activities—but perhaps even more concerning: Parents today are afraid to let their kids be bored. Says Saldanha, “I’ve seen parents whip out a screen at story time when a child gets distracted.” It's just too easy to fill every spare second in our constantly connected digital world. We're all guilty of it.

Known for its focus on tactile, educational toys, Creative Kidstuff did cave to the trend five years ago and add a technology section. “We tried to bring in teaching tech,” Bonoff says. And it sold. But the reality of kids abandoning toys in favor of electronics at an earlier age is fewer manufacturers are making toys for older kids. “Tech came in and filed that void,” Bonoff says.

The success of Shoreview-based startup Turning Tumble is a reflection of the hunger for engaging, educational, hands-on toys and games for kids 8 and up. Turning Tumble invites players to build mechanical computers powered by marbles to solve logic puzzles. Former University of Minnesota professor Paul Boswell and his wife Alyssa Boswell—also a former teacher—started tinkering with the idea for a new kind of game that would be fun, while also teaching kids how computers are made. In 2017, they launched a Kickstarter to raise $48,000 and ended the first day at an eye-popping $400,000.

“Everybody is using computers all the time, yet people don’t know how they work,” Alyssa Boswell says. “We have a great need for all sorts of engineering and programming, but as we move further and further away from computational thinking and logic, kids just aren’t exposed to it.”

Turning Tumble is now sold in more than 200 specialty retail stores, including Creative Kidstuff and Kiddywampus, where sales associates can tell the story and explain how the game works. “With our product being so deeply educational,” Boswell says, “people don’t look at the box and know right away what it is.”

But even with strong retail partners, Boswell says store sales pale in comparison to direct to consumer. “Our bread and butter is selling from our own website and doing our own direct marketing. If we didn’t have that, we wouldn’t be able to be in toy stores.”

There are lots of reasons why Creative Kidstuff became a losing proposition. It got caught in the middle—too big, with six stores and e-commerce, to run a lean operation; too small to command discounts or custom orders from large manufacturers. Bonoff mentioned increasing costs of employee health care, the rising minimum wage, and rent as contributing factors. “The percentage points just keep eating and eating away.” She didn’t see any uptick in Creative Kidstuff sales when Toys ‘R Us closed.

Bonoff believes the future of toy retail will be wrapped up in convenience: Grocery stores, or destination retailers like Barnes & Noble, which has continued to stay in the toy business. “There’s a shift in where the consumer is going to pick things up,” Bonoff says. “The community makes a choice with their feet.”

It leaves the really little guys—the Kiddywampuses and Mischief Toys in St. Paul—to carry the torch for creativity and imaginative play.

“Retail isn't at all easy nowadays—if it ever was,” Marshall of Mishcief Toy says. “We work hard to create an experience and build community. As a small family business, that may be a little easier for us to do than it was for Creative Kidstuff, but they were still pretty good at it. Probably the biggest difference is that we don't have investors that we have to answer to. It's just our family to sink or swim, so we're maybe a little more flexible about good years vs. bad years. I'm hoping that this will be a bit of an awakening and people will see that the Twin Cities still has a wonderful selection of diverse and amazing toy stores like Kiddywumpus, Hub Hobby, Air Traffic, and many others.”

On Saturday, Kiddywampus hosted its first “Grandparents Group” event with story time and art projects for grandparents and kids to do together. Saldanha says she even had people whose grandkids live out of town wanting to come, just for ideas. “Everyone is looking for ways to connect.”