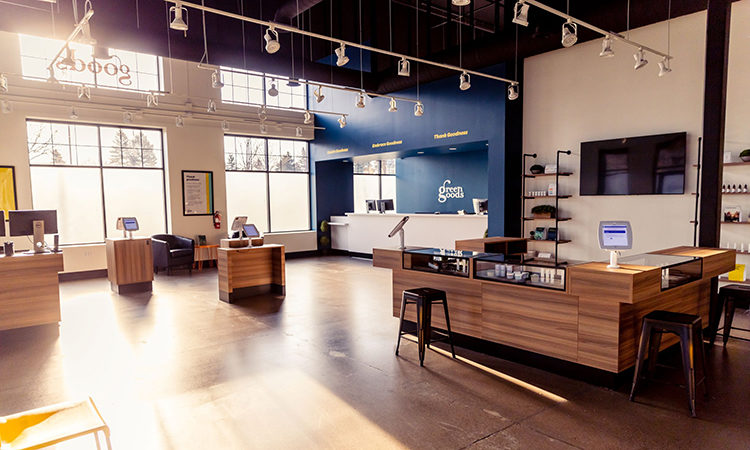 Vireo Health’s dispensary in Woodbury. The company changed the names of its stores to “Green Goods.” Vireo Health

In a motion filed in Hennepin County Fourth Judicial District Court Thursday, Dec. 1, Vireo dismissed its case against multiple state defendants. The case, which was originally filed in September, was dropped without prejudice, which means it can still be refiled at a future date.

The lawsuit centered on the law passed during this year’s legislative session that allows for the production, consumption, and sale of hemp-derived THC edibles and drinks so long as the consumable contains no more than 5 mg of any form of THC per serving and 50 mg of THC per package. Vireo claimed it was discriminated against and its constitutional rights were violated because THC derived from hemp and THC derived from marijuana are chemically equivalent.

Hemp and marijuana are, for all intents and purposes, the same plant. Legally, marijuana is classified as containing more than 0.3% of THC, the plant’s psychoactive substance.

However, marijuana has not been legalized in Minnesota – though conversation around its potential legalization in the coming legislative session has been mounting after Democrats won control of both the state House and Senate in this year’s mid-term election.

While THC derived from marijuana is not legal here, businesses can sell products with THC derived from hemp under federal law. THC is the psychoactive component in cannabis plants. Though it is chemically equivalent regardless of where it’s derived, hemp-derived THC has actually been legal in some form in many states – including states that have not legalized recreational marijuana – since the 2018 Farm Bill went into effect. The law defined hemp as a plant containing no more than 0.3 percent of Delta-9 THC and removed hemp from the Controlled Substances Act.

These intricacies between state and federal law are important when looking at the recently dropped lawsuit as it made an unusual ask of the court. Vireo asked the court to rule that the company be allowed to sell its medical marijuana-derived THC edibles to people outside of the medical marijuana program, so long as those sales comply with the current regulations in place for hemp-derived THC edibles.

Defendants in the now-dropped case included attorney general Keith Ellison, commissioner of the Department of Health Jan Malcolm, and director of the Office for Medical Cannabis Chris Tholkes, along with county attorneys in many of Minnesota’s largest counties.

Vireo did not immediately respond to a request for comment on why it opted to dismiss its lawsuit.

Founded in 2014, Vireo Health was Minnesota’s first medical cannabis company and one of only two licensed cannabis cultivators in the state. Goodness Growth Holdings, Vireo’s parent company, was sold to a Chicago-based firm earlier this year. LeafLine Industries, which was also sold to a Chicago company this year, is its only Minnesota-based medical marijuana competitor.