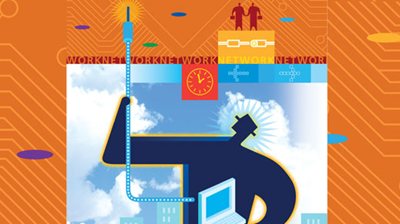 Videoconferencing provides a face-to-face meeting without the travel costs.
August 11, 2009

Those who haven’t used videoconferencing for a while may be in for an eye-opener when sampling the technology today. Rather than the choppy delivery, jittery audio, or stamp-sized computer images that characterized many earlier systems, today’s high-definition videoconferencing applications, beamed over ever-expanding bandwidth connections, create the feeling of an in-person meeting. Users now expect the same video and audio quality they get from the flat-screen HD televisions and surround-sound in their living rooms.

A combination of improved quality, advances in networking, and falling bandwidth costs—along with shrinking travel budgets—have more organizations using videoconferencing as an everyday communications tool. Today, it’s common to find front-line employees videoconferencing from cubicles and executives appearing on life-sized screens in boardrooms that are oceans away.

There are two main types of videoconferencing systems: group and personal systems. Group systems rely on high-quality, remote-controlled, pan-tilt-zoom cameras, omnidirectional microphones, flat-panel screens, and projectors to offer the highest-quality video experience. Advances in video compression technology, such as the H.264 standard, have paved the way for TV-quality and high-definition video in room-based systems.

“High-definition videoconferencing has been around for a while, but the difference now is the price has been falling, which makes the technology more affordable and accessible to more companies,” says David Woolley, president of Minneapolis-based Thinkofit, an online conferencing consulting company.

Personal or “one-to-one” videoconferencing systems deliver video images over the office desktop, transmitting video via Internet protocol (IP) networks with use of PC-based Webcams and software. The migration of video from traditional circuit-switched ISDN transmission, which sends video over phone lines, to IP networks has meant lower costs and other benefits. As the costs of bandwidth have fallen and compression technologies improved, it’s allowed for easier sharing of video images, PowerPoint presentations, documents, and the like across corporate networks.

As a result, organizations are finding new applications for videoconferencing. City fire departments now use the technology to train firefighters in multiple firehouses so they don’t have to travel to a central location—and risk being gone should an alarm sound. Patients unable to visit remote clinics or too sick to travel can use the technology to consult with their doctors from the comfort of their homes. Home-based workers can videoconference with bosses or co-workers during the day.

Experts say video is of particular value in online communication when some emotion needs to be conveyed, when trust needs to be established, or when visual demonstration can speed learning or understanding.

Among the hottest things in group systems is what’s known as telepresence, an arrangement that creates an “in person” meeting experience with life-sized, high-definition panoramic video images. Typically employing multiple high-def cameras and three large, co-joined screens set on one side of a conference table, telepresence allows an executive in Minneapolis to feel as though she’s sitting at the same table as employees in London.

“It’s for those meetings where people really want that immersive, ‘across the table’ feel,” says Michael Werch, president of Video Guidance, a full-service videoconferencing firm in Eden Prairie.

Because full-blown telepresence systems start at $200,000, budget-conscious companies often seek a telepresence-like effect without the high price tag, Werch says. Some of his clients have turned, for example, to LifeSize, a Texas-based videoconferencing company, for more affordable high-definition systems in the $5,000 to $15,000 range, a purchase which typically includes fewer or smaller HD screens but still creates impressive in-person effects. “Instead of buying one major telepresence system, people are thinking they can outfit a dozen rooms for the same price tag,” Werch says.

At the Minneapolis Videoconferencing Center, office manager Val Travers says she’s seeing more executive recruiters and law firms using the center for conducting employment interviews and taking depositions from distant witnesses. These organizations often prefer the rental option to avoid purchasing equipment or installing ISDN lines they may use only on a quarterly or semi-regular basis.

The center has a 12-seat videoconferencing suite with a high-definition camera and both IP and ISDN transmission options. The suite also includes a document camera to send and view documents, charts, or photographs, and digital and VHS recording services for later review of videoconferences.

Rental of videoconferencing equipment and services at Avex, a St Louis Park–based audio-visual technology firm, has ticked up during the difficult economy, says owner and president David Throldahl. Avex rents codecs—essentially the brains of a videoconferencing system—in addition to cameras, screens, and microphones. The company’s sales and installations, however, have slid as fewer new facilities are built or boardrooms customized for conferencing. “We do a lot of rentals for things like quarterly meetings, because companies weigh the cost of purchase against how often they use the videoconferencing equipment throughout the year,” Thordahl says.

He also is seeing greater use of Web video streaming, where employees can, for example, view an event broadcast from a remote location. “A company might hold a main meeting in Minneapolis, and a satellite branch in Chicago can see it streamed live into its conference room,” Thordahl says. These events typically are taped and archived as well for later viewing.

In response to the recession and company cost-cutting, AVI Systems has created custom-built carts for customers that make videoconferencing systems more versatile. Rather than installing equipment in specific rooms, clients can wheel the 50- or 65-inch panel screens, cameras, and microphones from room to room. “A larger company might have four or five regular meeting rooms but not want the cost of outfitting each of the rooms, so they might buy two of the cart systems,” Baer says.

The bread and butter business for MSpace, an audiovisual systems provider in Minnetonka, has long been turnkey system design and integration services for the corporate and government markets. For example, the company recently upgraded a videoconferencing system in the boardroom of Ryan Companies, the Minneapolis-based commercial real estate firm. Ryan had been relying on a roll-about system and using its existing projector screen only for local presentations. MSpace installed a system to improve communication between remote offices over a beefed-up IP network.

MSpace has also added a lower-cost desktop videoconferencing system to its product line. Using a new standard known as scalable video coding, the product provides HD-quality videoconferencing over IP networks, including the public Internet, says Rebecca Trainor, marketing coordinator at MSpace. Rather than an upfront capital expense, companies pay for the service with an annual subscription. “Companies still want videoconferencing, but with budgets being frozen or cut, many are looking for lower-cost desktop solutions, especially smaller businesses,” Trainor says.

Video Guidance is offering a bundled service that combines HD video, voice, Web, and streaming services. The incrementally billed service is designed to take the burden of owning, supporting, and troubleshooting technology off of customers, Werch says.

The migration of videoconferencing from the boardroom into cubicles continues to accelerate as the cost of bandwidth falls and network infrastructure improves. Companies now see greater value in equipping PCs with Webcams, software, and headphones so employees can communicate with distributed co-workers or customers for training, informational, or sales purposes. In addition, a new standard, known as H.239, has standardized the way data sharing takes place over many videoconferences, making it easier for presenters to share data like PowerPoint presentations and PC-based documents as well as their own images.

The growing popularity of free desktop videoconferencing software such as Skype, SightSpeed, and Tokbox has had ramifications for the corporate market, Woolley says. As more executives use these tools in their personal lives with family and friends, they begin to see the business applications.

But Woolley warns that you can’t expect great quality from free consumer products. “The quality of most of these applications has improved, but you still get what you pay for,” Woolley says. Which means you’ll still run into occasional glitches where images freeze up or a connection may drop, and you won’t have the level of customer support available with higher-end business products.

As for the future, many believe video’s next frontier is the wireless handheld market. Werch is among those excited about the potential of adding video to mobile calling features, enabling phone users to see who they’re talking to or to view videoconferences. At present, the technology’s challenges include ensuring a steady camera image and creating a proper camera angle for image capture.

“We think adding high-definition video to phone devices has great potential,” Werch says. “There’ll be a point in the not-too-distant future where companies won’t want to add any more applications to their PCs, and where voice-only service on handhelds will be the exception rather than the norm.”

This article was published originally as “The Connected Meeting” in the August 2009 issue of Twin Cities Business, page 96.