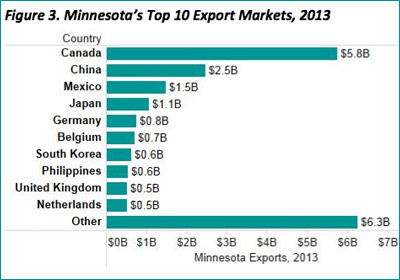 State officials said Thursday that the value of goods that Minnesota companies exported in 2013 dipped slightly from the prior year.

Minnesota businesses exported $20.7 billion worth of manufactured, mining, and agricultural products in 2013, down from $20.8 billion in 2012, according to the Minnesota Department of Employment and Economic Development (DEED).

And while state officials touted the important role that exports play in Minnesota's economy, Minnesota lagged the 2.1 percent national growth rate for exports, and it ranked 20th among states based on export activity, retaining the same position it held last year. The slowdown comes after Minnesota exports climbed to new highs in 2011 and 2012.

A Breakdown of Minnesota Exports

Regarding the exported products themselves, machinery sales totaled $4 billion, the most among product categories but a 1 percent decline from the previous year.

DEED said that higher demand for aircraft and spacecraft products in the Netherlands and Saudi Arabia were a big driver in that sector’s growth. Beverage exports were actually fueled by sales of denatured alcohol—for use in ethanol, not for drinking—to Canada.

Can The Twin Cities Double Its Exports?

Exports may need to pick up steam if the state wants to meet previously announced goals. In 2012, Governor Mark Dayton announced the “MSP Export Initiative,” a program whose goal is to double Twin Cities-area exports by 2017, to more than $35.2 billion.

Twin Cities exports totaled about $25.2 billion in 2012, the most recent data available, compared to $21.6 billion in 2007, a DEED spokeswoman told Twin Cities Business. (She pointed out that the metro numbers are higher than the state figures because they come from differing sources; the state data focuses on goods produced in Minnesota, while the metro data includes distributors of products made elsewhere.)

A 2012 Star Tribune story pointed out that businesses in the metro area would have to increase exports by nearly 15 percent per year to meet the ambitious goal. While significant ground would need to be covered, the DEED spokeswoman said the goal of doubling exports “is absolutely attainable and not out of reach.”

“Exports are a vital part of the state’s economy, with more than 8,600 businesses in Minnesota exporting goods and services,” DEED Commissioner Katie Clark Sieben said in a statement. “With new trade offices opening in South Korea, Brazil, and Germany, the state is positioned to continue building export sales around the world and attracting more foreign direct investment.”

Twin Cities Business sat down with Sieben for its “Interview Issue.” Read the Q&A, which includes a discussion of exports, taxes, and workforce productivity, here.