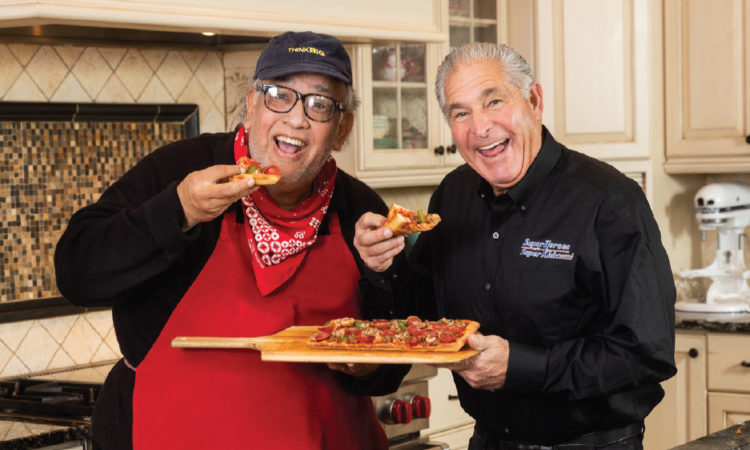 'Famous' Dave Anderson and Steve Schussler are about to disrupt the pizza business.
By Adam Platt
December 31, 2021 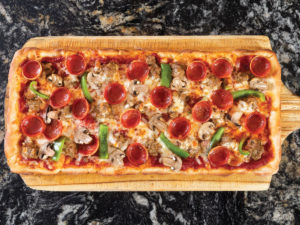 Steve Schussler and Dave Anderson go way back. Anderson was the first investor in Schussler’s Rainforest Café chain, in fact. But they’d never worked together. We associate Anderson with barbecue, but the man has a palate with far more diverse tastes. Anderson believes that he has more signature-recipe SKUs in grocery stores (over 30) than any restaurateur alive. “He’s a savant with flavors,” says Schussler.

“We’d talked about ideas for years,” says Schussler, “because we’re both type A’s,” so the pot was always simmering. Schussler’s game is environments and stories, which have made his restaurant concepts uniquely lucrative for Disney’s and Universal’s Florida theme parks. Anderson’s always in the kitchen.

Schussler is a New Yorker, Anderson has Chicago roots, so both have pizza in their culinary DNA. Anderson says he has been tinkering with ideas for the perfect pie for most of the last 30 years: flour, water, cheese, sauce, pans, ovens. And almost a decade ago, he and Schussler quietly decided to birth a joint venture.

Anderson says over the last few years he convened summits of cheesemakers, oven manufacturers, sausage guys, all with the goal of creating a bespoke pizza that could be easily replicated in a franchisee’s store. Their pizza is rectangular, for more efficient use of space, but the more revolutionary element, says Anderson, is a computerized oven that doesn’t require specialized venting; this makes it easier to comply with building codes, thus reducing franchisee outlay and simplifying real estate considerations.

The duo believe they could have their signature pies (Anderson designed the pan it cooks in) in 1,000 to 2,000 franchise
locations at maturity.

Big Dreams Pizza Co. will launch this spring at a location that was still under wraps at press time. The franchise model is geared to a modest cost of entry to deliver opportunity to Americans with a thirst for their own business. The business plan also includes a centralized commissary in certain markets (Orlando will be the test) to facilitate a delivery product without the inherent flaws of delivery pizza.

The duo believe they could have their signature pies (Anderson designed the pan it cooks in) in 1,000 to 2,000 franchise locations at maturity. They foresee potential revenues of $1 million to $2 million per store and see their partnership as an “unstoppable powerhouse.”

Pipe dream? Hubris? They anticipate the critique. Anderson says his years and years of behind-the-scenes toil are but an expression of humility. “Both of us have failed before,” he notes. “We have no illusions.” 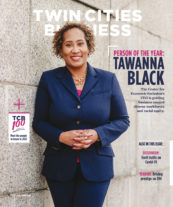 “Ego in our business is a killer,” adds Schussler. “We are in this to change lives, and if it’s not doing that, we will change direction.”

Update (3/9): In March, Anderson and Schussler announced plans to open their pizza concept in the former site of Schussler-owned Galaxy Drive-In on Highway 7 in St. Louis Park. This followed a dalliance between Schussler and locally based media personality and chef Andrew Zimmern. The two had discussed Zimmern taking over Galaxy on multiple occasions but the recent conversations never bore fruit. Instead, the distinctive retro drive-in will lose its Jetsons-era cladding and become a 60-seat pizzeria with to-go service as well, says Schussler. The founders intend it as a proof-of-concept, to convince would-be franchisees of the viability of their own “big dream.” Schussler says it is too early to project an opening date.