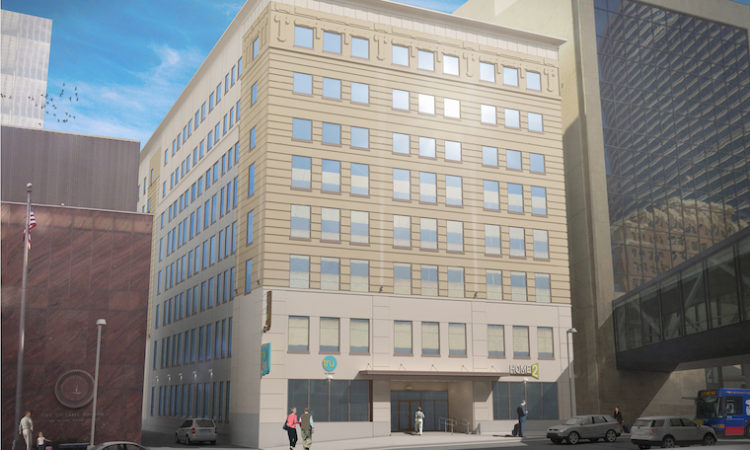 Projects calls for 201 new rooms in downtown Minneapolis.
By Burl Gilyard
May 14, 2019

Is there room for one more hotel in downtown Minneapolis? Lake City Hospitality LLC, a partnership between Eagan-based JR Hospitality and Iowa-based Hawkeye Hotels, is banking on it.

Plans call for a major overhaul of an aging, empty office building at 317 Second Avenue South in Minneapolis, adjacent to the TriTech Center office property. The eight-story building is slated for an $18.8 million overhaul; the project includes building a 41,000 square foot addition.

The 201-room hotel will include two different brands from Hilton: Tru by Hilton and Home2 Suites by Hilton. Hilton debuted the Tru brand in 2016, billing as an affordable hotel aimed at younger travelers. There are currently no Tru locations in the state of Minnesota. The project is slated for construction in May 2020.

The developers have tapped Minneapolis-based Stahl Construction as the construction manager for the project.

“We will be building in and around a historic building on a really tight downtown Minneapolis site,” says Jessie Houlihan, president of Stahl. “Over the last few years, urban adaptive reuse, hospitality projects have become an area of specialization for our team, and we’re excited to be aligning our multi-family team with the strength behind Lake City Hospitality LLC.”

The building dates to 1900 and has been empty since 2012. Hennepin County sold the building in 2013, but the road to redevelopment has been slow. The city of Minneapolis approved another developer’s plans for a 137-room Holiday Inn Express at the property in 2015, but the project never moved forward.