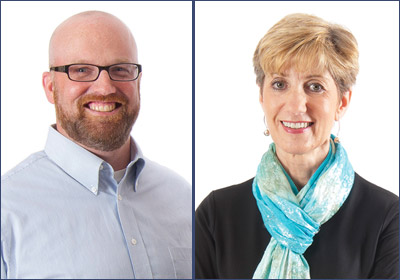 Marcia Ballinger and Lars Leafblad have formed Ballinger | Leafblad, Inc., and their initial clients include the Bush Foundation, CaringBridge, the University of Minnesota, and more.
July 18, 2014

Marcia Ballinger and Lars Leafblad have formed Ballinger | Leafblad, Inc. They are finalizing an office location but plan to work out of the greater St. Paul area.

The duo worked side-by-side from 2007 to 2012 at Keystone, where they were co-chairs of the firm’s civic practice. Ballinger is heading straight from Keystone to the new venture, whereas Leafblad most recently led the Bush Fellowship leadership programs for the St. Paul-based Bush Foundation.

Ballinger told Twin Cities Business by email that she and Leafblad “bring a complimentary set of approaches, networks, and connecting expertise along with a shared passion for serving civic clients.”

Leafblad, who appeared in TCB’s 2013 Black Book, is also the founder of Pollen, a digital-networking site whose members share jobs, events, and other information among themselves. Late last year, that organization merged with Sioux Falls, South Dakota-based OTA and receives funding from the Bush Foundation.

In fact, the Bush Foundation is counted among Ballinger | Leafblad's inaugural clients. Others that appear on the new firm's client roster include CaringBridge, Northland Foundation, RÃªve Academy, and the University of Minnesota.

“We believe an increasing number of organizations view a leadership search as more than just a search,” Leafblad told TCB. “They see an executive search as a moment to create and implement an engagement strategy that builds stronger relationships with key stakeholders of the institution in addition to producing a successful recruitment outcome. We want to partner with those organizations.”