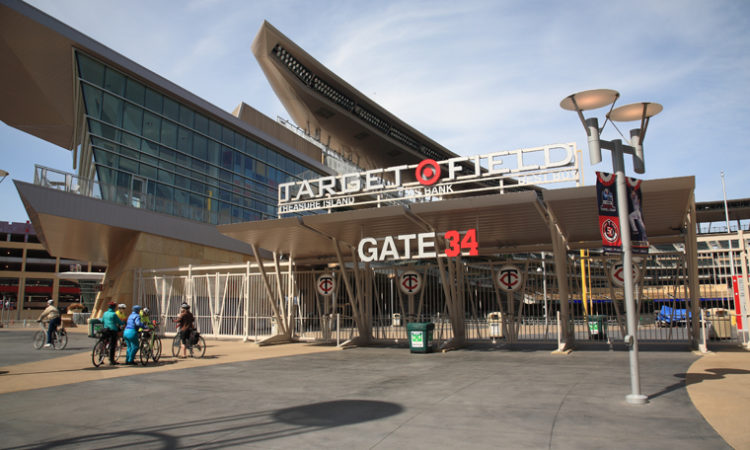 Gate 34 at Target Field is the targeted area of improvement. The Twins organization hopes to add about 9,500 square feet behind the perimeter that will flex as a marketplace after the line in thins.

The proposed improvements are expected to wrap up before the start of the 2019 season.
By Adam Platt
October 09, 2018

On Thursday the Minnesota Twins will present a plan to the Minnesota Ballpark Authority to reconfigure the area around Gate 34 (the Kirby Puckett gate), which flows directly out of 6th Street. The renovations will accommodate a more substantial security perimeter and weather canopy, but also allow for an enhanced gameday experience, says Twins President Dave St. Peter.

Roughly 60 percent of fans enter through the two gates off 6th and 7th Streets and Major League Baseball’s increasingly stringent security expectations (none of which existed at the ballpark’s debut in 2010) and efficient fan throughput are the primary motivators.

St. Peter says the team is adding roughly 9,500 square feet of space behind the security perimeter which he said will zigzag from the B Ramp staircase to the current tap wall at the south end of Gate 34. Once security screening has ended for the game, the area will be partially utilized for a “market concept” incorporating food and beverage and theme-oriented merchandise vendors “that wouldn’t fit for 81 games but would for a weekend,” he says.

The team is currently working on programming the space. St. Peter said he is unaware of any similar concept currently extant in MLB.

The other portion of the new space will be given over to an artificial turf area that will likely be popular with families, St. Peter says.

The work will require relocation of the iconic metal ball glove and the removal of the vertical hop-entwined topiaries, which never really grew out as hoped.

The team will spend several million dollars on the improvements, but no taxpayer funds, says St. Peter. The work is the primary capital expenditure in the ballpark during the offseason that began on October 1.

The Twins begin the 2019 campaign with a home game on March 28 against the AL Central champion Cleveland Indians. The team expects improvements to be complete in time for that game.