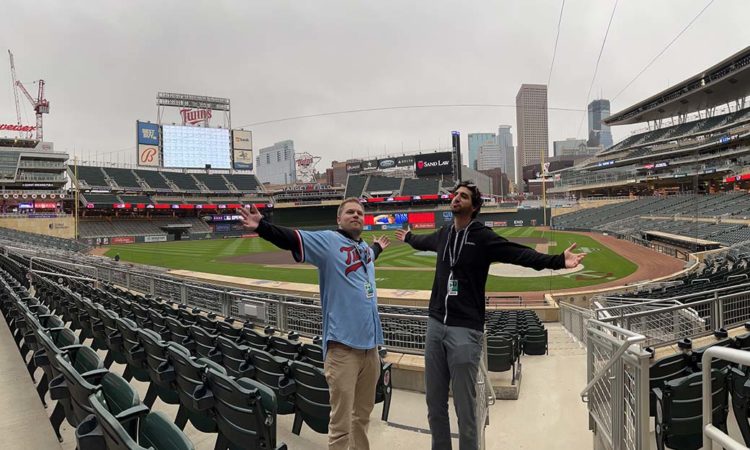 Cohort members EDGE Sound Research and AWSM Sauce bring their products to the stadium in hopes of “infusing innovation at all levels” for the Minnesota baseball team.
By Winter Keefer & Tina Nguyen
April 07, 2022

Opening day for the Twins’ 13th season at Target Field is not just about watching the game and hearing the roar of the crowd. It’s also about innovation this year as the team debuts products made by startups run through the Twins’ newly-launched accelerator program.

The major league baseball team aims to amp up the fan experience this season with offerings from two startups – EDGE Sound Research and AWSM Sauce – both of which went through the first iteration of Minnesota Twins Accelerator by Techstars, which launched in 2021.

The ResonX Sound Lounge at Target Field will be the first live environment application of EDGE Sound Research technology – audio technology that allows listeners to not only hear sound but feel it.

“Fans will feel every pitch as it hits the catcher’s glove,” said Chris Iles, senior director of brand experience and innovation for the Twins Baseball Club. “Fans will feel the crack of the bat in a way that has never been experienced before.”

Up to six spectators at a time can experience the lounge in the main concourse at Target Field near section 117 during the first homestand. The lounge will open on a first come, first served basis

After taking some time to experience this new audio technology, spectators can wander over to the Delta SKY360° Club to experience some saucy new innovation. The club is saying goodbye to single-use plastic containers for ketchup, mustard, barbeque, and hot sauces in the month of April. The Club will instead use AWSM Sauce’s patent-pending, dry-pack sauce mixes delivered in compostable packaging.

This month serves as a test of how the startup company’s offerings work in a live game setting.

It’s a fairly rare opportunity to debut a new product to such a wide audience, said Brett Brohl Managing Director of the Minnesota Twins Accelerator by Techstars.

“There are not a lot of enterprises willing to take risks on early-stage innovation,” he said.

Why a baseball team is running an accelerator

The Minnesota Twins Accelerator by Techstars launched its first cohort in Fall of 2021. Selected from a pool of more than 120 applicants, the ten participating startups worked out of the North Loop’s Ford Center for the entirety of the three-month program.

The practical application of new products for the Twins’ use – such as the EDGE sound system and AWSM Sauce sauces – played a role in their selection for the accelerator, Iles said.

“We were looking for companies that would have an immediate impact on the gameday experience here on Target Field,” he said.

The Twins will continue to look for companies that can offer practical applications for the team in its next accelerator cohort. Applications open May 9.

There are three reasons the Twins launched an accelerator with the help of Techstar. Iles, who has spent his entire career in baseball described these reasons as: “plays.”

Thirdly, and maybe most importantly, it’s a revenue play. The team is seeking ways to diversify its revenue streams.

“We think that early-stage venture investing is a good way to do that,” Iles said.

EDGE Sound Research: Riverside, California-based EDGE Sound Research is here to change how you perceive reality. The startup came together when Valtteri Salomakim was introduced to Ethan Castro, a hard-of-hearing audio engineer, and his sound reproduction research. This sparked EDGE Sound Research, and the co-founders began demoing their ResonX experiential audio at different events.

Originally, when EDGE Sound Research entered the Twins Accelerator, its key focus was to launch ResonX bundle as a direct-to-consumer transaction. The co-founders quickly adapted their business model and product development approach upon hearing the need for new experiences and engagements in live venues, such as a Twins game at Target Field.

This meant making its product scalable and adaptable, Salomakim said, comparing the technology to lego blocks that can be used in both consumer and business applications.

“As an early-stage startup creating a new audio technology that many have to feel to believe, we knew that understanding how to implement our technology in sports stadiums, movie theaters, and live event venues would be key,” he said.

EDGE Sound Research recently reached a new milestone when debuting its new “embodied audio” technology at the Consumer Electronics Show this past January in Las Vegas. Sharing its vision of turning any physical object into a sound system for its users to hear and feel, the showcase boosted opportunities to expand the ResonX products for seated entertainment, including its implementation into the Twins stadium.

“We want to fundamentally change how we perceive reality. Our ResonX technology is only the starting point to blur the lines of real-world and virtual-world experiences,” said Salomakim. “By this pursuit, we are making an equitable world of sound that is enjoyed through someone’s body, eliminating any barriers to creating or consuming any future experience.”

The two began to look elsewhere for condiments after the redundant hauling of recycling and trash bins to the curb every week. When examining their kitchen cabinets and refrigerator, they saw that single-use plastic bottles were everywhere.

Starkey and Lehmann then began experimenting with a powder and water formula for sauce mixes. Upon realizing the powder recipe was “all the taste and none of the waste,” the two dads decided to take the idea a step further.

Before the accelerator program officially began, AWSM Sauce leaders said they leveraged their Techstars network to raise $770,000 in a pre-seed funding round. During the program itself, the co-founders leaned into its infrastructure, knowing this could get them connected to giants that can take “sustainable saucing” to the next level.

“It is an incredible honor to be in the TechStars network and to be building this partnership with the Minnesota Twins — after all of our hard work it’s incredibly validating to be associated with both of these organizations,” said Starkey. “As cliche as it is, this is the big league on both fronts. From an accelerator perspective, it’s game time. We are no longer a garage startup, we are on a roster sheet with companies who are IPO, being acquired, or raising 9 figure rounds. On the baseball side, it’s time to step up.”

As part of AWSM Sauce’s official launch, the company will debut its AWSM Sauce Classic Ketchup, AWSM Sauce Chesapeake Fire Sauce, and AWSM Sauce Honey BBQ at the end of the month through its website. AWSM Sauce also plans to jump into fundraising to expand its current team of three (which includes the co-founders) and its digital presence.

“Ultimately, we want to remove the recycling burden for our customers and to do that means that we need to be where sauces are sold and provided: on shelf, in restaurants, online and in stadiums,” said Starkey. “We are in such an amazing position to bring a first-to-market product to the world and help our customers sauce responsibly.”