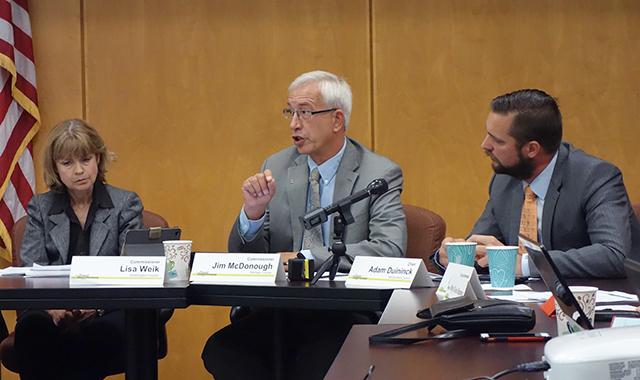 Twin Cities Transit Funding Board to Attempt a Break-Up…Again

The regional board, born of a time when there was a greater sense of regionalism between the cities and the suburbs, could be dead by October 1.
June 01, 2017

This time they mean it.

The commissioners from the five Twin Cities counties that make up the Counties Transit Improvement Board, lovingly known as CTIB, met Wednesday to begin the process of breaking up. The regional board, born of a time when there was a greater sense of regionalism between the cities and the suburbs, could be dead by Oct. 1.

Since being formed in 2008, CTIB distributed $1 billion in grants to 10 different transit corridors. In its place will be five metro counties — Anoka, Dakota, Hennepin, Ramsey and Washington — going it alone, or at least crafting county-by-county deals to further the construction of future mass transit lines.

To that end, in the wake of CTIB’s dissolution the state’s two most populous counties — Hennepin and Ramsey — will double the local sales tax devoted to transit, from a quarter on each $100 purchase to 50 cents. The three other counties currently in CTIB — Washington, Anoka and Dakota — will maintain a quarter-cent sales tax but keep the revenue for their own projects rather than share it regionally.

The big question mark when it comes to future light rail and bus rapid transit projects now becomes federal participation. If the feds continue to pay up to half of the construction costs for new projects (as they have in the past), the dissolution plan and increased sales taxes could clear the way for a multibillion expansion of light rail and bus rapid transit in the region over the next decade. In fact, the nonfederal share of construction dollars would be available for not only the $1.86 billion Southwest LRT project but also the $1.536 billion Bottineau Line; a possible light rail line from St. Paul to the airport; and three bus rapid transit lines in Ramsey and Hennepin counties.

All that could formally be put in motion with a vote by the five-county board on June 21. It must be unanimous, which is why it didn’t happen when first attempted in March. Dakota County’s CTIB commissioners refused to go along, arguing the distribution of revenue and responsibilities wasn’t advantageous enough for them.

It is now. Negotiations completed in early May sweetened the deal for Dakota County, leading it to lift its threat of a veto of the dissolution. The county will get more cash in the divorce, and also gets out of providing ongoing operating subsidies for the Red Line bus rapid transit line from the Mall of America to Apple Valley. The Met Council will pick up that $1.3 million annual cost.

That is more than the other counties think is a fair distribution. But it does allow the dissolution to go forward. And dissolution is the only way forward for construction of the additional transit lines. “In the scheme of things, it’s a bad deal, it’s an unfair deal and an unjust deal,” Ramsey County Commissioner Jim McDonough told the St. Paul City Council last week. “But don’t let the really bad get in the way of us doing better.”

To work, the dissolution plan relies on the juxtaposition of two state laws that fund local transportation. All counties in the state can levy up to a 0.50 percent sales tax for transit as well as roads and bridges. But counties that created CTIB were only authorized to raise 0.25 percent and only use it for new transit projects.

By ending CTIB, the five counties go back to being under the statewide law. Ramsey and Hennepin counties could then collect enough to replace the state's share of the projects, which has been harder to come by with Republican control of the House and Senate. The counties’ regional rail authorities would continue to help with funding via their property tax levies.

Even though the Met Council will add $1.3 million to its annual costs by paying for the Red Line subsidy, it will save nearly $9 million a biennieum – $4.5 million a year – through the dissolution plan. That’s because it will no longer have to pay the interest and principal on borrowing that was to have helped cover the state’s share of Southwest LRT construction. That debt instrument, called “certificates of participation,” will no longer be needed when Hennepin begins collecting its higher, post-CTIB sales tax, in October.

Next steps
Once dissolution is completed, a new legal and political order will be in place. Ramsey and Hennepin counties have already negotiated a revenue sharing agreement to pick up the operating subsidies on the Green and Blue lines, which is now shared by the state of Minnesota and CTIB. Once CTIB goes away, the state will pay its half but Hennepin and Ramsey counties will have to pick up the rest.

Even though around 70 percent of the Green Line's trackage is in Ramsey County, the new deal will have Hennepin paying 60 percent of the operating subsidy based on estimates of the ridership.

The two counties will also have to agree on how to share costs for future lines.  If the Riverview Corridor is built as a fixed guideway line, as either some form of rail or a fixed bus service, Hennepin will cover 30 percent of the operating costs and Ramsey will pay 70 percent.

Hennepin County expects to raise enough money from the doubled sales tax to pay the non-federal construction costs for Southwest as well as for Bottineau and the Orange Line BRT from Minneapolis to Burnsville. It would also be able to pay for its operating subsidy responsibilities and to share a bit more with Ramsey County for lines that serve both counties. “Some of us are still regionalists,” said Hennepin County Commissioner Peter McLaughlin. “We thought it was a fair adjustment.”

Poison pills vs. bitter pills
To even get to this point — where light rail backers can see a way to move forward — required the 2017 session of the Minnesota Legislature to end without blocking construction of currently planned projects.

Various versions of bills and budgets did just that. One would have dissolved CTIB on Dakota County’s terms and made it nearly impossible for the bigger counties to move forward on their own and in partnerships. Other language would have blocked construction of new light rail lines without the Legislature’s consent. And there were various plans to reconstruct the Met Council in ways that might have lessened its support for light rail expansion.

Most of those provisions are gone. The CTIB bill fell away when Dakota and the other counties reached their deal. The Met Council changes were removed as part of Dayton-Legislature negotiations. And most of the other so-called poison pills were abandoned by legislative Republicans.

Remaining are three items light rail backers don’t think are fatal to future projects. One bans the sale of certificates of participation for Southwest LRT, though they are no longer in the financing plan. Another requires a study of the vibration impacts on the condominiums directly adjacent to Southwest’s proposed tunnel. The third says the state will not share in the operating costs of the Southwest line.

But even that was changed at the end of session, so that only Southwest and not other proposed lines would be harmed by the change in the historic sharing of subsidies. “There’s some unfairness there,” Ramsey’s McDonough said. “We have one county paying 100 percent for one line and everyone else is getting state participation.”

And Southwest will not be operating until 2021 at best, so the counties and the Met Council have until then to try to get the state back in as a funding partner.

MINNPOST UPDATE: This story was updated to correct the financial impact on the Met Council if it does not issue certificate of depostion for SWLRT. The savings would be $9 million a biennium rather than $9 million a year.