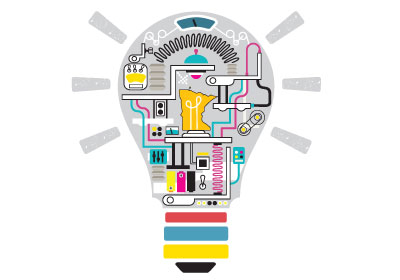 Minnesota continues to establish itself as a leader in innovation.

A recent report by The Brookings Institution found that the Twin Cities produced an average of 3,068 patents annually between 2007 and March 2012, the ninth-most among 358 metro areas across the country.

Meanwhile, Rochester had the third-highest number of patents issued per capita among those same metro areas, behind only San Jose, California and Burlington, Vermont. An average of 606 patents were issued annually in Rochester between 2007 and 2012, ranking the city 35th based on sheer number.

The top patent-creating companies in the Twin Cities in 2011 were 3M, Medtronic, Boston Scientific, Honeywell, and Seagate Technology. The metro area ranked 31st in the nation in terms of patents issued per capita.

IBM, which has a large presence in Rochester, created most of the patents issued in that city in 2011, followed by The Mayo Clinic.

According to the U.S. Patent and Trademark Office, Minnesota claimed 3.5 percent of U.S. patents in 2011, ranking ninth among states and beating more heavily populated ones. A story in the January issue of Twin Cities Business explored Minnesota’s history of groundbreaking inventions and what makes the state such a hotbed for innovation. To read it, click here.

To view a list of Minnesota’s 500 leading inventors, which was compiled by Minneapolis company Patent Buddy and also published in the January issue of Twin Cities Business, click here.