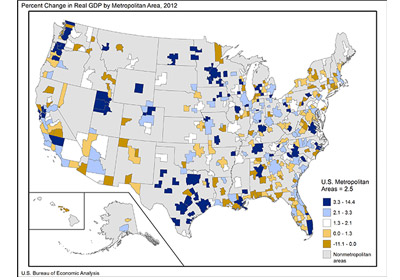 The majority of metropolitan areas throughout the United States saw their economies surge in 2012, with Minneapolis-St. Paul near the front.
September 27, 2013

The Twin Cities economy grew at an above-average rate in 2012, when its gross domestic product (GDP) rose 3.9 percent, up from 2.5 percent in 2011, according to data released Tuesday.

GDP increased in 305 of the studied 381 metropolitan areas across the country in 2012, averaging an increase of 2.5 percent, up from 1.7 percent in 2011, according to the U.S. Department of Commerce. The growth was driven by durable-goods manufacturing, trade (wholesale and retail), and the financial activities industry. Natural resources and mining, however, were not major contributors to growth.

According to the Star Tribune, GDP for the Twin Cities grew in 2012 at its fastest pace in almost a decade. And among the 20 largest metro economies, the Twin Cities had the fifth-fastest GDP growth—beating out the four biggest: New York (1.4 percent), Los Angeles (3.1 percent), Chicago (2.4 percent), and Washington D.C. (0.7 percent).

The Twin Cities’ rapid growth comes as no surprise after Minnesota was ranked as the fifth fastest-growing state economy in June, with a GDP growth rate of 3.5 percent—outpacing the national average of 2.5 percent.

Many smaller metro areas throughout the state fared just as well, if not better, than the Twin Cities. Mankato saw a 4.1 percent GDP growth; St. Cloud, 4 percent; Grand Forks, 3.9 percent; and Rochester, 3.6 percent. The outlier was Duluth, which saw a 2 percent GDP drop.

To view the full range of U.S. data click here.