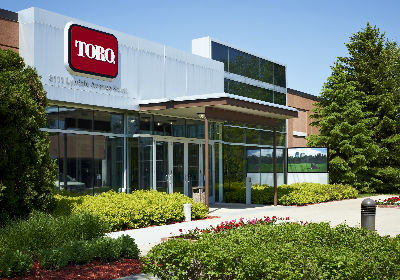 The Toro Company on Thursday reported first-quarter earnings growth and said it will strengthen its presence in China through the acquisition of a “micro-irrigation” company.

Bloomington-based Toro—which provides turf, landscape, rental, and construction equipment, as well as irrigation and outdoor lighting products—said its performance was driven by strong demand for large turf equipment and growth in micro-irrigation sales. Micro-irrigation refers to systems that slowly drip water to the roots of plants.

Toro’s earnings for the quarter that ended February 1 totaled $31.4 million, or 53 cents per share, up about 58 percent from the same period a year ago. Revenue, meanwhile, climbed about 5 percent to $444.7 million.

The company’s earnings exceeded the expectations of analysts polled by Thomson Reuters, who anticipated 43 cents per share. Sales, however, fell short of the $461.6 million that analysts predicted. Shares of Toro’s stock were trading up 0.02 percent at $45.25 Thursday morning.

“The optimistic outlook of customers across our businesses is encouraging, as we prepare for our primary selling season,” Chairman and CEO Michael Hoffman said in a statement. “Barring new economic headwinds, we anticipate the momentum our golf, landscape contractor, and micro-irrigation businesses enjoyed this past quarter will carry into spring. Our residential business retail potential looks solid as well.”

Toro also said Thursday that it has entered a deal to acquire a Chinese micro-irrigation company for an undisclosed sum. Toro did not identify the company’s name, and a spokesperson said it will not be revealed until the sale is complete; it is expected to close this summer.

“Although small, this acquisition will help strengthen our presence in China, a critical growth market, by establishing a micro irrigation base of operations,” Hoffman said in a statement.

Toro said it expects revenue to grow roughly 4 to 5 percent during its current fiscal year. It also raised its full-year outlook and now expects earnings to be between $2.40 and $2.45 per share. Toro previously expected fiscal 2013 earnings in the range of $2.35 to $2.40.

Toro is among Minnesota’s 25 largest public companies based on revenue, which totaled $1.96 billion in its most recently completed fiscal year.