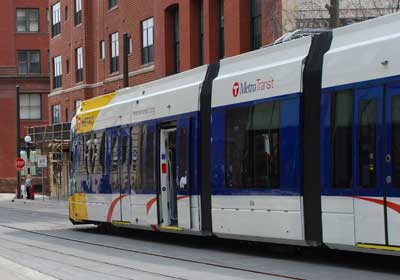 Planners are considering eight options for either moving existing freight traffic to St. Louis Park or keeping it in the Minneapolis Kenilworth corridor, in order to make room for a new light-rail line.
July 25, 2013

Plans for the Southwest Corridor light-rail line have sparked controversy, and planners are quickly approaching important decisions regarding its design—decisions that could also raise its cost.

Construction of the line, which would connect downtown Minneapolis and Eden Prairie, is slated to begin in 2015. But the federal government, which is expected to foot half of the bill, has insisted that local entities first resolve a dispute over the re-location of existing freight trains before proceeding.

The Star Tribune on Sunday pointed out that important decisions are expected to be made soon, and the newspaper detailed several alternatives that planners are considering. As Twin Cities Business reported in late May, one proposal calls for re-routing freight rail through the St. Louis Park High School football field.

Light-rail planners are mulling eight possible route options for either moving the freight traffic to St. Louis Park or keeping it in the Minneapolis Kenilworth corridor, according to the Star Tribune. Some of them could add millions of dollars to the projected $1.25 billion cost of the metro area’s third light-rail line, the newspaper reported.

For more information on the latest developments in the ongoing dispute, read the full Star Tribune story here.