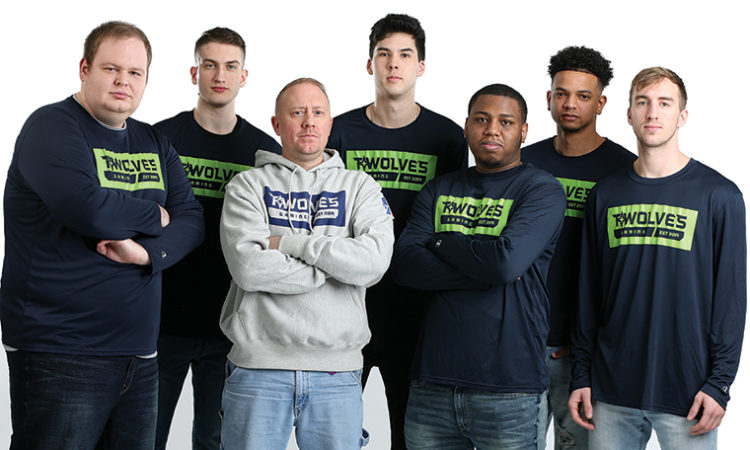 Timberwolves’ bank shot into competitive gaming is turning costly. Will it rebound?
By Sam Schaust
May 02, 2019

Worlds 2018, an e-sports tournament for the video game League of Legends, drew a colossal 205 million viewers during its championship match last November. That’s more than Super Bowls 2018 and 2019 combined.

Minnesota, by proxy of Timberwolves owner Glen Taylor’s new franchise T-Wolves Gaming, officially joined the e-sports fold this spring in the NBA 2K League. It will compete April to August on the NBA 2K video game courts, functioning much like existing sports franchises around the country.

Its roster of six were drafted out of a combine—or traded for, in one case—and relocated to Minnesota to train at a newly constructed 3,500-square-foot facility at Mayo Clinic Square in downtown Minneapolis. The team is supported by three full-time staff, including general manager and coach Shawn Vilvens, who has over a decade of experience coaching college basketball. Yes, video gamers are employing those with real athletic experience to create an edge.

Being a T-Wolves Gaming player also comes with perks: an all-expense-paid luxury condo in Bolero Flats in Minneapolis for the length of the season and a salary of $30,000 to $35,000, based on experience. Not counting potential sponsorship money, players can also take home a piece of this year’s $1.2 million prize pool by placing high in tournaments and NBA 2K League playoffs.

In its inaugural season last year, viewership of the NBA 2K League Finals was a fraction of the NBA’s championship series—650,000 viewers, compared to an average of 17.6 million. Timberwolves chief strategy officer Ted Johnson believes that gap will narrow over time. “In our first couple of years, we will certainly lose money, but with an eye toward breaking even and then eventually making money” in the near future, Johnson says.

With the expectation that more teams will join the league, increased awareness could lead to more sponsorship money down the road, Johnson adds. “In a sense, we’re flying the airplane as we build it.”

T-Wolves Gaming: A Day in the Life

Training won’t take place on game days, which will fall on Wednesdays, Thursdays, or Fridays.