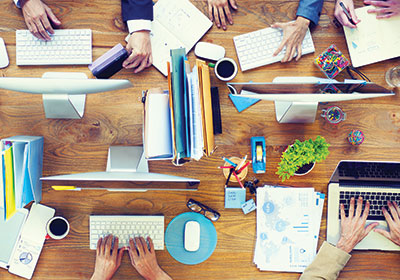 The Year Of New Office Space

It’s been a long, slow climb back from the recession for commercial real estate. But many developers are now bullish on projects that had been on the endangered species list for many years: new office buildings.

At the outset of 2016, five new office projects—totaling roughly 2.1 million square feet of new space—have just been finished or are nearing completion. Across the metro, there are several additional proposals for new office projects on the drawing board. Commercial real estate veterans say that it’s the busiest time for new office construction since the late 1990s.

The T3 project in the North Loop of downtown Minneapolis is the strongest signal for the improving fortunes of the local office market. (T3 stands for “timber, transit and technology.”) Houston-based Hines, a global real estate developer and owner with a significant presence in the Twin Cities, broke ground on the project in July 2015. Hines charged ahead on a spec basis, with no leases in hand. T3, set to open this coming fall, is being touted as a building that fits the trend toward collaborative, open office layouts.

The emerging North Loop neighborhood has become ground zero for many up-and-coming companies. The surrounding area is rich with apartments, restaurants, transit and entertainment options. That can be a draw for workers who want to be close to such amenities. But office space, largely found in converted brick and timber buildings in the North Loop, has become increasingly tough to find as the neighborhood’s popularity has grown.

In his read of the market, Bob Pfefferle, a director with the Minneapolis office of Hines, says that there are now “limited large blocks of space” available in the North Loop. Pfefferle says that given the “boutique” scale of the T3 building—221,500 square feet—that it was a reasonable risk to build on spec, and that interest from prospective tenants has been “robust.”

Developers are looking to certain pockets of the metro where tenants could drive demand for new buildings. An age-old real estate axiom holds that not every announced project will be built. But here are a half-dozen serious contenders:

Target Field Station office building: United Properties can build up to 250,000 square feet on its North Loop site, but it is waiting to land some leases before starting construction.

Towers at West End: The St. Louis Park-based Excelsior Group has plans for a two-tower phased project that would ultimately bring 700,000 square feet of new office space to the West End area in St. Louis Park.

801 Carlson: Winnipeg-based Artis REIT is pitching a new tower in the I-394 corridor in Minnetonka calling for 317,000 square feet of space. Minneapolis-based Ryan Cos. would be the developer.

8100 Tower: United Properties is pitching a new office project next to the five-building Normandale Lake office park in Bloomington. The site could accommodate up to 455,000 square feet, but may ultimately be a smaller building.

801 Marquette Ave.: Wakefield, Mass.-based Franklin Street Properties Corp. is floating a plan to redevelop the former TCF Bank site in downtown Minneapolis, which it owns. Franklin Street is considering ambitious plans for a 50-story tower that would combine apartments, a hotel and 260,000 square feet of office space.

Ryan Cos. Will Move HQ to Downtown East

Minneapolis-based Ryan Cos. US Inc. deepened its commitment to its $450 million Downtown East redevelopment in late November, announcing plans for the Millwright Building, a new four-story, 172,000-square-foot office building.

Ryan Cos., a family-owned developer and construction firm, will occupy about one-third of the space—55,000 square feet—in the building. With Ryan anchoring the project, it expects to begin construction this coming spring and complete the Millwright Building in the spring of 2017.

Ryan executives weighed numerous options for new space in downtown Minneapolis, but ultimately opted to build their own new building, another addition to the current office building boomlet.

“We looked at virtually every building that was available in downtown Minneapolis in our size range,” says Collin Barr, president of Ryan’s North Region.

A brokerage team with the local office of Los Angeles-based CBRE Group Inc. will handle office leasing. By early December, Barr says there was “a significant amount of interest” in the building from prospective tenants.

Barr notes that the current building trend still is nowhere near the roughly 5 million square feet of new office space built here during the 1999-2001 cycle.

Most market watchers say that if a spec office building can work, it can succeed in this, Minneapolis’ hippest new neighborhood. At the same time, competing developers and brokers are watching T3 closely. How T3 fares will be a bellwether for the local office market in 2016. One key question: Will tenants pay higher rents to be in a new building?

Hines is quoting net rental rates of $22 per square foot for T3. That’s a notable premium from rental rates in older buildings. At the end of June 2015, Bloomington-based Cushman & Wakefield/NorthMarq reported the average net rent for Class A space in downtown Minneapolis at $17.63 per square foot.

“I think the rates that these new buildings require is still at the very high end of what people are willing to pay,” says Mike Salmen, managing principal with the Minneapolis office of Houston-based Transwestern. “I’m not sure there’s an answer yet.”

Veteran office broker Jim Damiani, senior vice president with the local office of Colliers International, says that tenants are making more efficient use of space. That may mean that they can afford steeper rents if they are leasing less overall space. He adds that it’s increasingly important for companies to find spaces that can help attract and retain employees.

A national study from Los Angeles-based CBRE Group Inc. rated North Loop among the best markets in the country for growing technology companies. At the end of June 2015, CBRE reported the office vacancy rate at 8.1 percent in the North Loop, notably below the 15.4 percent rate that CBRE found across the metro.

Bloomington-based United Properties is looking to develop another new office building in the North Loop, the proposed Target Field Station building. Bill Katter, president and chief investment officer with United Properties, says that they can build up to 250,000 square feet on their site and are hoping to start construction in 2016. But they won’t start building until they can land leases for about half of the space in the building.

“The North Loop has had strong demand for quite a while. We do want to get a signed lease before we proceed,” says Katter. “It’s just a hip neighborhood. There’s no quality vacancy in the market.”

The new headquarters for nonprofit

Be the Match marks another addition to the North Loop area. The 240,000-square-foot building, developed by Bloomington-based United Properties, was completed in November.

But the North Loop is not the only area drawing new office development. The other office projects nearing completion across the metro include:

The two-tower Downtown East project in Minneapolis, which has 1.2 million square feet of combined space, will be occupied and owned by Wells Fargo. The western tower will be completed in the first quarter of this year; the eastern tower will be finished in the second quarter.

Xcel Energy Inc., which will occupy a new building on Nicollet Mall, expanding its downtown Minneapolis campus. The 222,000-square-foot building will be completed in August.

The Offices at MOA, which added 170,000 square feet of new Class A office space to the Mall of America in Bloomington. The space was being completed as Twin Cities Business went to press, but had not announced any tenants.

But even amid the building boomlet for new office buildings, there is no shortage of empty space in older existing buildings. Cushman & Wakefield/NorthMarq reported that the metro office vacancy rate of 16.4 percent at the end of June 2015 was the lowest the market has seen in seven years, but that’s still relatively high. In downtown Minneapolis, C&W/NorthMarq reported a 2015 mid-year office vacancy rate of 15.6 percent—but that still translated into 4.1 million square feet of vacant office space available in downtown Minneapolis.

And the vacancy rate could climb higher. C&W/NorthMarq’s report notes that as tenants such as Wells Fargo and Xcel Energy move to new buildings, they will be leaving behind space in other buildings in the multi-tenant market. The report estimates that those tenants will vacate approximately 1.5 million square feet of space in downtown Minneapolis in 2016 and ’17.

“Downtown [Minneapolis] is attracting suburban tenants. I’ve seen more of it in the last 12 to 18 months than I’ve seen in a long time,” says Salmen. “But we’ve got a lot of vacant space to fill in the core.”

Minnetonka-based Opus Group is developing the Xcel Energy project in downtown Minneapolis, but the company has no other office projects underway in the Twin Cities and won’t build on spec.

“I think speculative office [construction] downtown in any large scale is challenging and will require significant preleasing,” says Dave Menke, president of Opus Development Co., adding that the challenge for developers is landing an anchor tenant to kick off projects. Menke thinks that T3 will succeed in the North Loop, but says that there are lots of empty office spaces to fill: “There still needs to be a considerable amount of absorption of existing inventory.”

Challenges also remain for new office projects in the suburbs. Malvern, Pa.-based Liberty Property Trust stopped construction on Liberty Plaza, a 120,000-square-foot office building in Eden Prairie, in 2008 when the economy began to slow. Seven years later, the company still has no plans to restart the project.

“Until there’s a strong enough market and an anchor tenant, we won’t start it. I don’t think we would start a building in today’s environment,” says Dave Jellison, vice president and city manager for Liberty’s Minnesota operations. “I think we’re seeing gradual improvement, but nobody’s building spec buildings because there isn’t enough demand to require that space.”

Many market watchers, however, say that the area near the West End in St. Louis Park can likely support new development. Excelsior Group, based in St. Louis Park, has a site that can accommodate two new office towers near the intersection of Interstate 394 and Highway 100. Tom Tracy, vice president with the Excelsior Group, notes that the site is close to downtown Minneapolis, a draw for prospective tenants.

“There’s interest in our site. We would like to start in 2016; that’s our objective and we think that’s a realistic objective,” says Tracy. “There are always more proposals than there are real deals, but we really feel strongly about the fundamentals of our site and the building that we can develop here.”