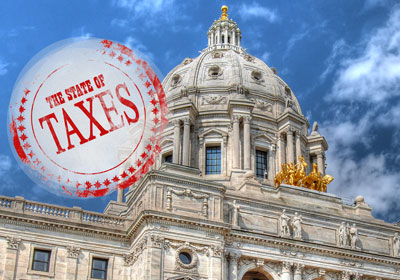 The State of Taxes

It’s no secret to wealth advisors: some high-net-worth Minnesotans change their state of residence for tax reasons, choosing to live in Florida or elsewhere at least half the year. But how common is this practice? And which tax issues do they find most vexing?

Wealthy individuals have been paying renewed attention to estate planning since last December, when Congress revamped the federal tax laws. For those with significant estates—including owners of private businesses who want to transfer some or all of their enterprises to the next generation—good news abounds:

•   For married couples, each spouse’s federal exemption is now portable, meaning that the couple essentially is entitled to a total exemption of $10 million, regardless of how the marital assets are divided or which spouse dies first.

•   The estate tax, gift tax, and generation-skipping transfer tax are unified, meaning that they all share the same $5 million exemption.

•   The federal estate tax on assets above the exemption level is set at a flat rate of 35 percent.

The bad news is that a clock is ticking. Congress passed the current tax legislation for only two years. After 2012, the $5 million exemption could be renewed—or not.

“So the question is, ‘How do we take advantage of the benefits available during this two-year window?’” says Sharon Olson, president of the Olson Wealth Group, a Bloomington advisory firm. “For many of our clients, this may represent the greatest opportunity to transfer their assets and relieve any future planning needs for the rest of their lives.”

A complicating factor for Minnesota residents is that Minnesota is one of 18 states that collects its own estate tax. And while the federal exemption has climbed for a decade, Minnesota’s exemption remains at $1 million.

As the gap between the federal and state exemptions has widened, affected people have come to find Minnesota’s estate tax increasingly annoying, says attorney Barry Gersick, a partner with Minneapolis law firm Maslon Edelman Borman & Brand, LLP. The state’s actual tax bite may remain the same, but Gersick says the exemption gap makes it seem more onerous to the clients he advises.

This year, someone passing on a $5 million estate doesn’t have to pay any federal taxes and wouldn’t even have to file with the Internal Revenue Service—except that filling out federal tax forms is necessary in order to complete the Minnesota forms required to pay the state taxes on $4 million worth of the estate.

A lot of people with estates in the $2 million to $5 million range “really find that offensive,” Gersick says.

The indignation grows when they do the math. Or, rather, when their accountants do the math, as Minnesota’s sliding-scale estate-tax rate is not easy to calculate. As a rough rule of thumb, some experts advise clients to assume that the state will take approximately 10 percent of everything above the $1 million exemption up to $5 million. The top rate of 16 percent kicks in on portions of taxable estates greater than $10 million.

What about that Minnesota resident with a $5 million estate, who owes nothing to the federal government if he dies before the end of 2012? CPA Jeffrey Starbird, a partner with Lurie Besikof Lapidus & Company, LLP, in Minneapolis, does the math and finds that Minnesota’s bite out of the $4 million taxable part of the estate will amount to about $391,000.

Numbers like that can make a person think about changing residence to one of the many states that levy no estate tax. Says Starbird: “Our clients would look at that, plus all their other assets, and consider their lifestyle and say, ‘Is that enough to make me move?’”

Sometimes the answer is yes. But the reasoning is rarely that cut and dried.

Since the federal estate and gift taxes are unified, it makes little immediate difference whether you gift assets to people while you live or leave the assets to them when you die. (“Little” difference instead of no difference, because tax issues are never dead simple.)

However, Minnesota imposes no state gift tax at all. This has clear implications for estate planning. As Olson puts it: “If I gave my daughter $5 million today, I would pay no state tax on it. But if I left her $5 million in my will, my estate would be subject to a Minnesota estate tax of [about $391,000].”

This long-standing quirk in Minnesota’s tax law has been a consideration in estate planning for years, says attorney Bradley Frank, a partner with the Barnes & Thornburg, LLP, law firm in Minneapolis. It leads to a phenomenon he calls death-bed gifting.

Suppose you have a $2 million estate, Frank says. It isn’t subject to federal taxes, but you will owe state taxes on $1 million. “The day before you die, you can give away one-million-and-one dollars, and your estate won’t even have to file a return in Minnesota,” he says.

Gifting makes far more sense in Minnesota than passing on assets when you die, experts agree. The caveat, of course, is that you must be assured you will have enough left after the gift to see you comfortably through the rest of your life. “For some people, the amount of money required for that is well north of $10 million,” Frank says.

On the federal level, the fact that “portability” now gives married couples what amounts to a $10 million exemption eliminates the need for a lot of the traditional juggling of assets required to ensure that both spouses’ full exemptions were applied to their joint estate. But while couples with estates worth less than $10 million may assume they no longer have to worry about such things as credit shelter trusts—at least, not during the current two-year tax window—that applies only to federal estate taxes, experts caution. Minnesota’s estate tax exemption is not portable between spouses.

For business owners considering how best to pass on an enterprise or its assets, the absence of a Minnesota gift tax, coupled with the current $5 million federal exemption for gifts and estates, presents intriguing possibilities.

Olson points out that the national economic downturn and the slump in the commercial real estate market have depressed the value of many businesses and their buildings. “That makes this a great time to gift shares in a business,” she says. “You can gift more shares today before you hit the $5 million [federal] exemption level. And when real estate goes back up, you’ll have transferred the gain to your children’s generation. Plus, you’re in Minnesota, so you pay no state gift tax.”

Starbird says that the same idea applies in spades if you believe that your company is poised for growth. “One goal in estate planning has always been to transfer growth to the younger generation—to prevent appreciation in value from being included in the older generation’s estate,” Starbird says. “So if your business is worth $5 million today but you think that in 10 years it will be worth $50 million, maybe now is the time to give it away. Because we don’t know if the [federal] exemption will stay at $5 million after 2012.”

Pack Up and Leave?

There is no question that some Minnesotans change their state of residence for tax reasons, though the experts can’t say how many. But every one we spoke with has seen clients leave to avoid Minnesota’s state income or capital gains taxes (top rate 7.85 percent) or estate tax.

Sometimes it is simple to isolate the reason for a move. Sources say that business owners preparing to sell a company rather than transfer it to their children often establish residence in another state a year or more before the sale to avoid paying Minnesota’s capital gains tax.

As Gersick points out, “someone with a $300 million business to sell” has a powerful incentive to avoid a state tax of 7.85 percent on the proceeds. Of course, he concedes, even if Minnesota cut its tax rate in half, the incentive still would be strong to move to a state that levies no individual income tax at all.

For the most part, however, tax flight happens for more complex reasons. “The conversation usually starts because our client has heard that Florida or Nevada or South Dakota has no state income tax,” says Charles Maloney, a principal with asset-management firm Lowry Hill in Minneapolis. But when the client looks at property taxes, sales taxes, and gas taxes, not to mention quality-of-life factors, the advantages of moving to another state often appear less clear cut.

So sometimes Minnesota’s estate tax can be the “real kicker” that pushes someone to make the move, Maloney says. This is especially likely, he says, if they already own a winter home somewhere, and establishing residence in Florida, say, “is really just a matter of spending six months a year there instead of five.”

Indeed, everyone we spoke to agrees that the vast majority of clients who change residence for tax reasons are those with a southern home—one that they already own or plan to buy for reasons related to Minnesota winters. It’s true that some advisors can recall a few clients who moved to Wisconsin or the Dakotas to escape Minnesota’s estate taxes, but it’s difficult to assign clear blame to the state tax environment for pushing people out.

Changing one’s state of residence requires that a person spend just over half the year—183 days—outside Minnesota. As Frank puts it, “there are a lot of reasons why you might want to spend some months away from Minnesota . . . If we had weather like San Diego, would taxes be driving people out?”

The state keeps an eye on people who maintain a Minnesota dwelling after changing their official residence, and the 183-day rule is taken seriously. Experts warn that if you try to cut it too close—say, by spending 182 days in Minnesota—an unexpected trip to the hospital or even a delayed plane flight can change you back into a Minnesota resident for that year, subject to Minnesota income and estate taxes.

The 183-day rule isn’t the only thing that can trip up a careless “nonresident” whose heart is still in Minnesota. There is also a “26-part test,” says Minneapolis attorney Christopher Burns, a partner with Henson & Efron, PA.

So called because the Minnesota Department of Revenue lays them out in an A-to-Z format (26 letters), the “test” is a set of factors the state may consider, in addition to the 183-day rule, to determine whether a person is, in fact, a Minnesota resident. These include the state in which the person has a driver’s license, club memberships, active church affiliations, bank accounts, and more. Burns and others say that in the current budget crunch, the state has become more aggressive in pursuing cases where residency, for tax purposes, is open to question.

Where does Minnesota’s estate tax, specifically, fit into the stew of reasons that lead its well-heeled citizens to establish residency elsewhere? It’s just one piece of the puzzle, Burns says. “But it’s one more reason why there are places around Naples [Florida] and elsewhere where lutefisk and lefse are not mysterious to anybody.”