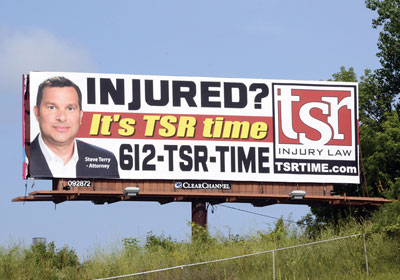 The FYI On TSR

The guy on the billboards is one of the most visible attorneys in the Twin Cities.
May 07, 2015

Steve Terry might be one of the most visible attorneys in the Twin Cities that nobody knows. Who’s Steve Terry? He’s the guy on the billboards.

“We certainly do get plenty of people that call and say ‘I saw your billboard’ or ‘I saw you on TV,’ ” says Terry, founding partner of Bloomington-based TSR Injury Law.

Terry does not have specific data about how much business the firm generates from its ubiquitous billboards, of which as many as 30 can be active at a given time, but “the phones are constantly ringing.”

“When we started doing billboards, we did notice an uptick,” Terry says. He does not know precisely what percentage of the firm’s business is generated by the ads. “The one thing I do know,” he says, “is we still get 50 percent of our business from past and current clients.”

Terry founded TSR as Terry & Associates in 1998. Partner Chuck Slane joined in the late 1990s. Then Rich Ruohonen joined in 2009. “That’s when it became TSR,” says Terry, “because nobody could pronounce ‘Ruohonen.’ ”

The injury law firm did not bother with hiring an ad agency. The slogan came out of discussions about a memorable phone number, which ultimately became 612-TSR-TIME.

“I designed the billboard,” says Terry. “We’re very pleased with how it’s all working.”

The firm, with 10 lawyers and an additional 25 staff, trademarked “TSR Time” in 2010. TSR also buys radio and TV ads, and has a marketing partnership with the Minnesota Timberwolves.

While Terry sees the billboards paying off for TSR, white-shoe law firms eschew billboard advertising. “We do more B2B work. We do a lot of electronic advertising with business journals and business-focused publications,” says Meg McCormick, spokeswoman for Faegre Baker Daniels. She notes that the firm does not do billboard or TV ads.

Recently Terry heard reports that popular KDWB-FM disc jockey Dave Ryan was discussing an onstage fall by Madonna and joking that it was “TSR time.” Terry sees that as clear evidence that the billboards are effective.