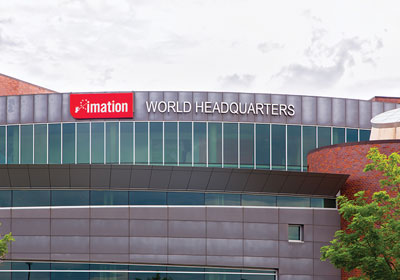 Imation In The Crosshairs

Imation in the Crosshairs A proxy battle is about to reach the endgame.

The data storage and security company’s sales have dropped 63 percent since 2008, when it reported $1.98 billion in revenue. (For 2014, the company posted $729.5 million in sales.) In the five fiscal years stretching from 2010 to 2014, Imation piled up cumulative net losses of $705 million. At the end of March, Imation’s stock was hovering around an anemic $4 per share.

As Twin Cities Business went to press, the proxy battle between Imation and New York-based activist investors the Clinton Group was heating up. Three seats on the six-member Imation board are up for election at the company’s annual meeting May 20. Clinton has nominated its own slate of three directors, including tech veteran Robert Fernander, who “can serve in an interim executive leadership position, if necessary,” according to the Clinton Group’s filings.

Clinton fought, and won, a similar battle last year with Eden Prairie-based ValueVision Media Inc., the long-struggling third-place player among home shopping networks. In June 2014, shareholders elected all five Clinton Group nominees to the ValueVision board. The company’s CEO promptly resigned, and the board tapped Mark Bozek as new CEO. The company was renamed EVINE Live Inc. in November.

Clinton is calling for a comprehensive review of Imation’s business, appointing a chief restructuring officer and cutting the company’s “corporate overhead.”

Mark Lucas, named president and CEO of Imation in May 2010, argues that the company is already transforming itself from a business focused on consumer products into a data storage and security company.

“Their input was relatively vague, and a lot of it we’re already doing,” Lucas says of the Clinton Group. “We already cut our corporate staff by 50 percent over the last two years. . . . We’ve done restructuring ourselves.”

But Clinton contends that they’ve seen little change, despite Imation’s announcement of a new “strategic direction” in 2011.

“I read the company’s proxy materials, and they are essentially asking shareholders to ‘Trust us’ as they try to fix the problems that they created,” wrote Joseph De Perio, Clinton Group senior portfolio manager in an email to Twin Cities Business. “Past performance and pedigree would suggest strongly the board and management does not have what it takes to reverse the stock price’s precipitous decline. Shareholders, customers, employees and stakeholders deserve better.”

Activist investor campaigns against public companies are on the upswing. Norwalk, Conn.-based FactSet Research Systems Inc. tallied 348 activist campaigns in 2014, a 28 percent increase compared to 2013. As of March 27, FactSet showed 108 campaigns for 2015, 37 percent ahead of the pace for 2014.

Nationally, activist investor groups today manage approximately $150 billion in assets, and the number of groups focused on activist investing has doubled within the last two and a half years, says Damien Park, managing partner of Philadelphia-based Hedge Fund Solutions, an advisor who specializes in activist investing.

Park suggests that companies targeted by activist investors are “either undervalued or underperforming.” He says that an activist group that does its research usually has already talked to large shareholders to gauge whether their campaign is likely to be successful.

The five largest owners of Imation stock own 59 percent of the company, according to the company’s proxy filing in late March (see graphic on right).

“Activists are successful a majority of the time, north of 75 percent,” says Park. But victory may be measured in degrees: Sometimes challenges will be settled if a company gives into some, but not all, of an activist investor’s demands.

In February, Imation announced that it had retained Houlihan Lokey as its financial advisor to “explore options” for the company. Lucas tells Twin Cities Business the move was “totally unrelated” to the Clinton Group’s actions. “At the end of the day, the result may be that we stay our course, if we determine that is the best way to enhance shareholder value,” says Lucas. “We’re focusing on data storage and data security.”