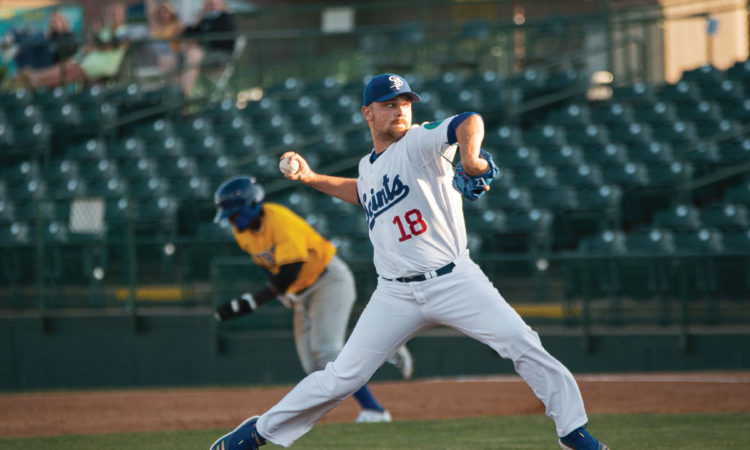 (Temporarily) Locked Out of Heaven

With the St. Paul Saints stranded in Sioux Falls through Aug. 4, how did Lowertown fare in a summer with very few fans?
By Holden Platt
August 20, 2020

Lowertown St Paul was abnormally quiet in June and July. The absence of the St. Paul Saints was palpable, with the team playing the first month of a shortened season in Sioux Falls. With the Saints out of Lowertown through Aug. 3, many businesses were unable to generate their usual revenue from pre- and post -game festivities, along with the buzz that the Saints bring to the area.

Tim Niver, owner of Lowertown’s Saint Dinette, spent a large part of last summer collaborating with the team. Dinette used Monday home games to attract fans looking for higher-end ballpark fare. With the absence of games at CHS for two-thirds of the summer, Niver was forced to “use PPP money to elongate the financial scenario,” meaning that Niver’s restaurants are takeout only for the time being.

The Saints’ league, the American Association, also looks different this summer, as only six of its 12 teams are active, with only five ballparks running as of Aug. 19. That raises the question: How did the Saints make money without fans in the stands through the majority of their season? According to Saints Director of Media Relations Sean Aronson, the American Association is splitting revenues among the teams playing. This was confirmed by league commissioner Joshua Schaub.

Although the return of the Saints was uncertain until July 24, the team devised some creative ways to get fans in the ballpark, including running a Friday Night Films and Fireworks promotion where fans were invited to watch a classic film, followed by fireworks. At the end of July, the team held the Senior Class Salute, where recently graduated high school seniors from the state of Minnesota played in a tournament.

Saints GM and EVP Derek Sharrer said at the beginning of July that the team “continues to be optimistic that we will be able to play at least a portion of our home schedule here at CHS Field this summer.” Sharrer’s prediction proved true: The team returned to CHS Field on Aug. 4.

The Saints have also found ways to get fans in the ballpark by splitting the stadium into six areas and capping each section at 250 fans. As for business in Lowertown, things are improving, at least according to Big River Pizza owner Steve Lott, who says that the team’s presence is a “morale boost.” But ultimately, he hasn’t seen a major increase in sales in the two weeks the team has been home. With the Saints season only a month from ending, only time and data will tell if Lowertown’s businesses are profitable entering the fall.