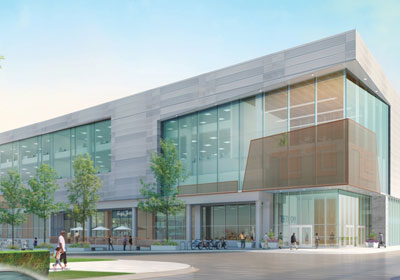 Minneapolis-based retailer Target Corp. announced a “strategic partnership” in a new North Minneapolis development that will be developed and built by Thor Companies. A groundbreaking for the $36 million project was held on Tuesday afternoon at the project site at 1256 Penn Avenue North in Minneapolis.

Gov. Mark Dayton and Lieutenant Gov. Tina Smith were among the attendees at the event. Target chairman and CEO Brian Cornell and other Target executives also attended.

“We couldn’t be more proud to partner with Thor on this important project,” Cornell said in a statement.

Thor founder and chairman Richard Copeland announced plans last year to relocate the headquarters of Thor Construction and its affiliated companies from Fridley to North Minneapolis. Thor is the largest minority-owned business in the state of Minnesota with revenues of more than $160 million.

Copeland and Ravi Norman, CEO of Thor Companies, are hoping that the private investment will be a catalyst for other projects in North Minneapolis, the most economically challenged corner of Minneapolis. Twin Cities Business was the first to report on Thor’s plans last year in a story examining business conditions in North Minneapolis.

“Through a strategic partnership with Target Corporation…this innovative project is poised to move forward, bringing hope and revitalization to a Twin Cities neighborhood that needs it the most,” said Norman.

Current plans call for a new building with 92,000 square feet of office and retail space. The project, which will include a 620-stall parking ramp, is slated for completion in the spring of 2018. Thor is developing, designing and building the project.

Target closed a retail location in north Minneapolis in 2003, citing the store’s poor performance. The former Target space at 701 West Broadway Avenue is now occupied by a Cub Foods store.

The site slated for Thor’s project, at the southeast corner of the intersection of Penn and Plymouth Avenues, has been vacant for more than 20 years. According to the city of Minneapolis, the site was home to a gas station from 1923 until it was demolished in 1969.

The Minneapolis Community Development Agency, predecessor to the city’s Community Planning and Economic Development department, first acquired the site in 1976. A McDonald’s franchisee built a restaurant, which operated on the site until 1992, when it was sold back to the MCDA. The site was cleared again in 1994.