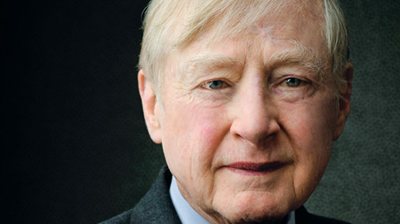 Stockbroker Brady Benson: The Waves He Made

Up till the day he retired in October, Brady Benson held on to the traditional commission model he followed throughout his 52-year-career: doing his own research and offering his picks to loyal clients. His industry changed; he didn’t. Along the way, he helped launch numerous Minnesota companies.
March 01, 2011

Would your stockbroker actually help get a fledgling business off the ground?

Brady Benson did it many times in his career. About 50 years ago, for instance, Benson was on one of his many visits to technology start-ups in Minnesota when he came across some engineers working on something called “numerical computers.” Though the machines were terrifically complex, Benson understood what was being discussed by these relatively unknown characters who were looking to finance their young business. “Give me your business. I’ll sell your stock,” he told them.

Benson’s sixth sense—honed by his own research and many company visits like this one—told him these guys were hot, and he wanted to spread the word. Their names: Seymour Cray, who would later design the world’s first supercomputer, and William C. Norris, founder of the company that sold Cray’s computers, Control Data Corporation.

By 1964, Control Data was a top glamour stock, making a three-for-two stock split for the second time since its 1957 inception. At its peak, the company generated $5 billion in revenue. What’s more, seven of the 10 founders of Control Data signed on as Benson’s clients. “If they heard about a company they were interested in, I’d do the research,” Benson says. “I got to be very good at it. A lot of people in that company made a ton of money and started their own companies.”

The market, he observes, “is just like fishing. The next moment can be the most exciting of your life.”

Benson, now 77, still feels that excitement, though illness and battle fatigue caused him to retire from Morgan Stanley’s Minneapolis office in October. Control Data itself has disappeared, but the technologies it developed wrought innumerable digital innovations that businesses—including financial firms—still profit from today.

The stock brokerage business also has changed profoundly since Benson started out more than half a century ago, and he resisted many of those changes. To be sure, he was a salesman, and a highly successful one. But the model that nearly all securities firms follow these days—push favored stocks, seek to move markets for big institutional clients—never appealed to him. His focus was always on individual clients, regardless of their net worth. And he always has looked for that little company poised to become a big fish.

Benson, slight of build, is a fast talker who changes subjects quicker than the Big Board posts new numbers. But he’s not slick. You could say he’s the anti–Gordon Gekko. Despite amassing considerable wealth, Benson is “still driving his old cars and living in the same Edina home he and his wife bought in the mid-’60s,” says longtime friend Jere Briggs, a retired attorney. And why buy new clothes when the old suits still fit just fine?

Don’t underestimate him, though. He’s the same guy who, in his youth, took his handmade, eight-foot skiff for an 18-mile, death-defying Lake Superior run just to get to church one day.

Unwilling to break his self-imposed commitment to attend 12 consecutive “first Friday” masses (a monthly tradition that’s less common in current Roman Catholic liturgical practice), he chugged over 10-foot rollers to Bayfield, Wisconsin, from the Apostle Islands, dashed into church to receive Communion, then got back in the boat and rode the towering waves home. “Scary things happen on that lake,” Benson says. “I tackled the storm and made it back.” Not unlike the tempestuous market he’s ridden for more than half a century.

Born in Ames, Iowa, in 1933, Benson had a nomadic early life, which forced him to adapt quickly to new situations. His father, Casper, worked for a large dime-store chain that frequently sent him to new locations to put out business fires. As a result, his son attended 22 elementary schools, which “helped me a lot in life. I got used to meeting new people.”

There were other lessons, too. Benson played football when he was young and got “beat up” in the ring in college boxing matches. “That taught me to never give up,” he says. It also helped develop his competitive streak. Many years later, working as a broker, Benson once shot a buffalo in Custer State Park and mounted the head in his office, just to outshine his top competitor, who earlier had shown up with the head of a steer. (Yes, it was a steer. Benson’s competitor had a cattle ranch in western Minnesota and shot the beast while culling the herd.)

Benson has always marched to his own drummer, even when the bandleaders preferred he follow their particular tunes. He researched stocks and companies with the devotion of a graduate student studying for oral exams.

“Every Sunday after church, Dad would take us boys to pick up a copy of Barron’s so he could study the market,” recalls his son Michael, a broker himself at Morgan Stanley. “The magazine hit the other brokers’ desks on Monday and he wanted a leg up. He was always prepared before the market opened.”

Benson started out in the brokerage business at Piper Jaffray in 1958. He soon moved on to another Minneapolis firm, Reynolds Securities, and occupied the same desk at the company for five decades, through its many ownership changes including Dean Witter and Morgan Stanley.

Benson’s sense of adventure propelled him to find gems “that grew from $10 a share to $50,” Michael Benson says. It also helped land his father 17 times in Morgan Stanley’s Chairman’s Club, an exclusive group of the firm’s highest producers. During his career, he opened more than 10,000 accounts. And thanks to his own research and pavement pounding, Benson learned where to find companies outside most of his clients’ comfort zones of IBM and 3M (though he recommends large companies like those, too).

“He’s an independent thinker,” says Bill Rosso, Benson’s manager for a dozen years starting in the early ’80s. “He bought and sold stocks and made suggestions to clients mostly from his own ideas. He wasn’t swayed by the company’s decisions or mine.”

Not even church dogma was sacrosanct. Benson’s longtime friend and colleague Ben Case tells this story: “Five or six of us went hunting every weekend. We always stopped at a restaurant Friday night, and I knew Brady was contemplating the fish dinner he’s supposed to eat. He’s a Catholic. The minute the waiter shows up at the table, Brady disappears. The waiter takes the order. I say, ‘The missing guy wants a steak.’ Brady comes back and says, ‘Oh, you ordered me a steak.’” It wasn’t his fault he wasn’t eating fish.

You could call that a devilish streak. But Benson’s career also reveals an angelic side. Besides being a broker, he also worked as what he calls a “venture investor”—a matchmaker who brought investors to a young company’s altar. It’s a role he’s played dozens of times.

“Today, everything’s about inside information,” Benson observes. “I’ve always done my own legwork. You learn about a company, you take a risk, and if you’re patient and let companies grow, you can do really well.”

Sure, some of his ventures were duds. A St. Cloud outfit that launched weather-type balloons to help patrol the southern U.S. border sank like, well, a deflated balloon. But Benson also has notched impressive successes. Back in 1965, he liked what he saw in a Minnesota company that had just gone public, a medical technology firm called Medtronic. Benson invested, and encouraged his clients to do the same.

Rod Young, a longtime med-tech executive who currently serves on several corporate boards, says Benson brought big-name shareholders to LecTec, then a Minnesota biomedical firm, when Young took over as chief executive in the mid-’90s.

“He promoted our stock to others and got additional shareholders,” Young recalls. “He isn’t just a broker; he’s a facilitator of relationships and business.” Young adds that Benson also introduced him to CEOs of similar companies with whom he could exchange ideas and explore possible shared sales and distribution efforts.

As a matchmaker, Benson “called all the wealthy people he knew—the owners of the Vikings, the Twins, the guy with the mansion on the corner,” Michael Benson says. His father then brought them together in a conference room in a local hotel, introduced the parties, and made the pitch.

“If you get the right company, and it rolls, it helps people,” Brady Benson says. It doesn’t hurt that post-matchmaking word of mouth brought him new clients. But primarily, he enjoyed bringing together promising companies and investors that could help make their ideas into successful businesses. “There’s great personal satisfaction in that,” Benson says.

For all his competitiveness and ability to bring high–net worth investors together to hear a start-up pitch, Benson also has a common-man touch.

He took on “the guys selling papers in the lobby of the building and the guy who owned the building,” Rosso says. “He wrote down every call he made every day in a notebook the size of the New York telephone directory. He never forgot a birthday or who was connected to whom.”

And for all of Benson’s considerable abilities as a salesman, “I’m not much of a schmoozer, like [brokers] were then,” he says. “But I’ve always known my clients. We were constantly in touch.”

Even the tightest client-broker relationships were tried during the challenging markets of the ’70s and early ’80s, however. Inflation during the Nixon and Carter years hobbled the industry, and “it was hard to make a living,” Benson’s former boss Rosso recalls.

The 1980s also saw the industry begin to push brokers toward a fee-based trading model. This approach put research in the hands of specialized departments, turning brokers into something like account managers and encouraging them to push stocks “picked” by the research analysts. It’s a more profitable model for financial firms. But it put pressure on traditional brokers like Benson, who preferred the more personal commission model.

According to Rosso, other significant trends affected traders like Benson. First, the ’90s technology boom opened the door to anyone who wanted to research, buy, and sell stocks. At the same time, new publications and television market gurus further eroded demand for broker expertise. By the decade’s end, markets were going digital, with stocks priced in increments of a penny instead of eighths of a dollar. That prompted much lower transaction costs because of narrower spreads. Meanwhile, mutual funds, not individual stocks, became the investment of choice for most Americans.

But Benson never really adjusted to the new industry paradigm. He stuck to the commission model, and remained a go-to guy for matchmaking deals throughout the ’90s and into the new millennium; he continued investigating stocks and making recommendations, sending fee-based accounts to his son Michael. And he kept making money for both Morgan Stanley and his clients.

“My dad is such an icon and knows so much, that Morgan Stanley gave him leeway to maintain his personal touch,” Michael Benson says. His father still closely follows the market on television and consults with dozens of friends weekly. He also manages his own portfolio and checks in with longtime friends.

As for tackling the health storm that lies ahead, Brady Benson is using the same strategies that have served him for so long. He’s researching his options and listening to his choices. “That’s how you come out ahead,” he says.