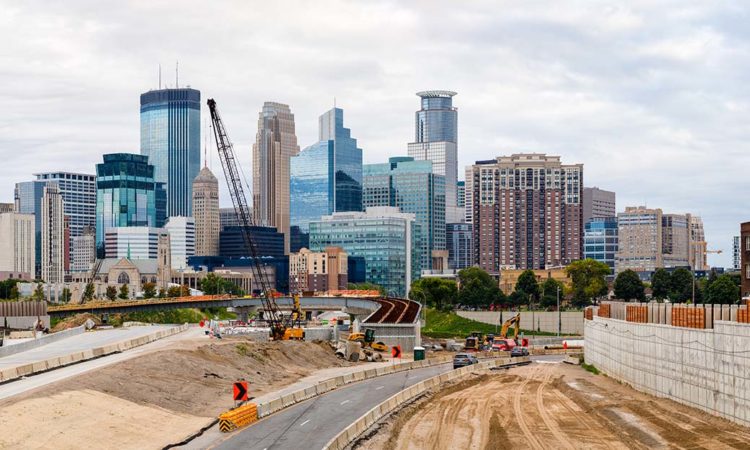 The number of construction jobs in Minnesota grew by 300 in December, according to DEED Shutterstock

Minnesota's unemployment rate ticked down 2.1 percent in December, according to the state's jobs agency.
By Winter Keefer
January 20, 2022

The unemployment rate in Minnesota is now lower than it was a year before the pandemic, the Minnesota Department of Employment and Economic Development announced Thursday.

The unemployment rate in Minnesota has ticked down to 3.1 percent, the lowest it’s been since 2019, according to DEED’s monthly jobs report.

From February to April 2020, Minnesota lost 416,300 jobs. The state has since gained back about 74 percent of those jobs, DEED Commissioner Steve Grove said during a Thursday news conference.

DEED is projecting to regain 100 percent of the jobs lost in the first few months of the pandemic by the end of this year, Grove noted.

Minnesota saw a drop of about 2,000 jobs in December. However, DEED reported the state gained 13,600 jobs in the month of November after factoring in a 5,000-job upward revision to the number reported in December. This meant November marked the largest single-month growth since March 2021.

Grove called November a “blockbuster” month for the state.

“It was just a huge month for Minnesota,” Grove said. “It kind of cooled off in December as you see but those upward revisions were really good to see.”

Jobs in the financial activities sector were down 900, while professional and business services were down 1,800. Manufacturing, which already saw job losses at several points in 2021, saw a decline of about 900 jobs, and the trade, transportation and utilities sector saw a decline of 800 jobs. The leisure and hospitality sector, meanwhile, was down 600 jobs.

Job sectors that saw gains included information, up 300 jobs; education and health services, up 1,800; other miscellaneous services, up 400; government, up 200; and construction up 300 jobs.

While the leisure and hospitality sector was down 600 jobs in December, Groves noted the loss was entirely in arts and entertainment subsector, with many events canceled or postponed as Covid-19 cases rose across the state and country.

The labor force participation rate remains steady at 67.7 percent in the state, higher than the national rate of 61.9 percent.

The average wage for production workers and workers at nursing and residential care facilities rose at a higher rate than other industries, marking a 12.4 percent increase over the year, with those wages now at an average of $21.13 an hour, Grove highlighted.

“Today’s jobs report is a reminder that economic progress in these times is not a straight line,” Grove said. “The good news remains that our economy is bursting with great job opportunities, and DEED will continue our proactive programs to Minnesota job-seekers across the state.”