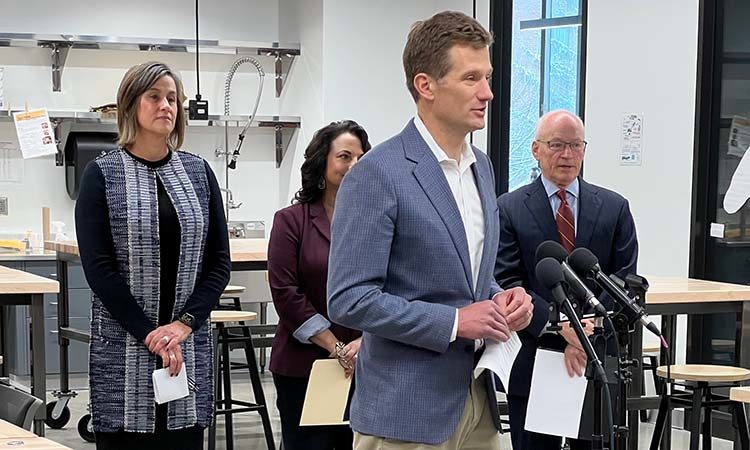 Steve Grove, commissioner of the Minnesota Department of Employment and Economic Development, is flanked by leaders at the state and the University of Minnesota. Dan Niepow

The state is working with the University of Minnesota to distribute federal funds to small businesses and venture capital funds.
By Dan Niepow
November 16, 2022

The state of Minnesota aims to give entrepreneurs another path to secure venture capital dollars.

At a press conference on the University of Minnesota Twin Cities campus on Wednesday, state leaders heralded the launch of a $34.5 million program that will provide direct funding to entrepreneurs and to other venture capital funds.

The funds will follow a winding path before they finally end up in the hands of entrepreneurs. The Minnesota Department of Employment and Economic Development will receive the money from the federal government in tranches; the department will then pass the dollars on to the University of Minnesota, which will make the final call on where to invest them. Under state law, government agencies are prohibited from making “fund-level commitments or direct equity investments,” according to DEED. The university, however, doesn’t have the same restrictions.

“We are all equal partners in the returns on those funds,” said DEED commissioner Steve Grove. “We can use the returns that come back to invest in future Minnesota startups.”

Grove views the $34.5 million investment from the federal government as a “one-time starter kit, if you will.” The plan is to invest the funds in startups and VC funds over the next decade, and to replenish the initial fund with returns on investments. “If [startups] succeed, we succeed, and that money can be circulated back into future investments,” Grove said.

Check sizes are likely to be $1 million or less, according to state officials. To be eligible, startups must be based in Minnesota. Venture capital funds don’t have to be based here, but they need to be investing in Minnesota startups, according to Grove.

Before making any investments, the U of M will conduct due diligence on other VC funds and startups. The university also plans to create an office to shepherd the process.

“We are addressing those issues head-on,” she said.