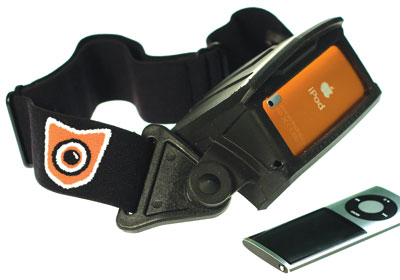 John Opdahl and his son have created a system for fastening video-capable iPods to helmets.
By TCB Staff
January 11, 2011

John Opdahl and his son Josh embarked on a ski trip to Utah last January and came home to Elk River with the germ of a business plan. To record skier’s-eye footage of their runs on the slopes, the pair jury-rigged a system to fasten Josh’s video-capable iPod Nano to his helmet.

There’s “nothing worthwhile” available for less than $100 in the head-cam market, John Opdahl says. The product of his and Josh’s collaboration, the Rampant View ($34.99, rampantgear.com), is for those “who have a Nano and want to dabble” in head-cam videography.

Since its launch in September, buyers have posted video at the Rampant View Web site from bear hunts, dirt biking trips, and other adventures. John Opdahl, who runs the venture alongside his full-time gig as an IT consultant, found a more utilitarian use: He wears the head-cam while disassembling electronics and plays back the video to help him with reassembly.

In November, Opdahl landed a deal with a major Dutch reseller, X-Sportscam.com, and is hopeful about selling with other online retailers in the near future.