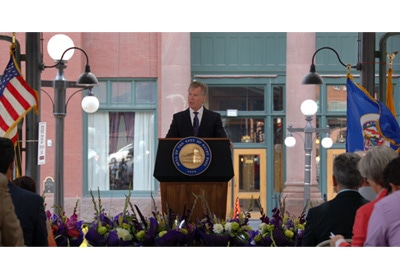 Chris Coleman’s proposed 2013 budget would reduce spending by $1 million, increase the property-tax levy by 1.9 percent, and restore $1 million in funding to the police department.
August 24, 2012

St. Paul Mayor Chris Coleman on Monday outlined his proposed 2013 budget for the city, which would reduce year-over-year spending by $1 million.

At the same time, however, the city’s property-tax levy would climb 1.9 percent. Coleman described the proposed increase as “at or slightly below the rate of inflation.”

Coleman also said that the budget includes “the largest health care savings we’ve seen in decades.” The budget indicates that the city reached a deal with HealthPartners, through which the company will serve as St. Paul’s health benefit provider from 2013 through 2015, at premiums lower than those paid in 2012.

But the mayor also pointed out that the city has experienced consistent cuts to state aid during the last six years.

During the budget address, Coleman said that his budget prioritizes investments in public safety, education, and infrastructure.

Last year, seven positions in the police department were left vacant—but Coleman’s 2013 budget would restore more than $1 million in funding to the department and fill those vacancies.

The budget also adds a lawyer to the City Attorney’s office, who will focus on community development and “work to protect victims of domestic violence,” Coleman said.

In addition, the city will conduct a “thorough assessment” of the Department of Safety and Inspections to determine “how we can create a better, more efficient process for our customers,” Coleman said.

The mayor emphasized a focus on education. This year, the city invested $60,000 to kick-start a “parent engagement plan,” and Coleman proposed committing an additional $190,000 in 2013. However, funding for certain library programs will end, and the budget calls for “a slight reduction in hours at the Central Library.”

Coleman said that the city has been investing in an overhaul of its entire technology infrastructure, and that upgrade will “continue at full pace in 2013.”

The budget also provides funding for the Frogtown Farms project, which will preserve an oak grove and provide green space for residents within the city’s Frogtown community.

“We need to ask ourselves what we value and then dedicate our resources accordingly,” Coleman said in a statement. “This budget reflects a dedication to children and safe streets. It understands the importance of private investment. It prioritizes green space and our parks. Above all else, it places an emphasis on being good stewards of taxpayer dollars.”

During the budget address, Coleman cited progress made on several large-scale projects that were previously announced as part of the “Rebuild Saint Paul” initiative, which aims to invest $1 billion in projects at 15 sites. The Lofts at Farmers Market development and the new Como Pool were cited as notable successes.

To view a video of Coleman’s budget address, which was presented Monday at the St. Paul Farmers Market, click here.

Minneapolis Mayor R.T. Rybak is set to present his budget to the city council on Wednesday, and a spokesperson for his office told Minnesota Public Radio that the mayor is aiming for a tax-levy increase of less than 3 percent.