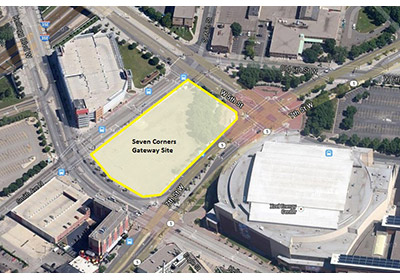 A new report outlines a framework for an "urban village" at Snelling and University Avenues; meanwhile, the city of St. Paul is seeking proposals for the “Seven Corners Gateway.”
July 25, 2014

A fresh report sizes up the development opportunities—and looming financing gap—for a large potential redevelopment site at the intersection of Snelling and University Avenues in St. Paul.

Separately, the city issued a request for proposals for development plans on a different site near the Xcel Energy Center.

The 44-page report by the Boulder, Colorado-based Urban Investment Group looks at the 34.5-acre site along the newly opened Green Line light-rail transit line and describes the property as potentially “transformative” for transit-oriented redevelopment.

The report outlines a framework for how the Metropolitan Council, the city of St. Paul, and RK Midway LLC—a partnership owned and managed by New York-based RD Management LLC, which owns the Midway Shopping Center at the site—can work together. The site is at the southeast corner of the Snelling and University Avenues, near Interstate 94, and is one of the busiest intersections in the city.

The study estimates $64.3 million in infrastructure costs at the site, including money for new streets, streetscape improvements, utilities, parking structures, open spaces, and site preparation. The study calculates a potential financing gap for those costs of $22 million to $31 million based on the current market value of the site, but indicates that tax increment financing or other tools could close the financing gap.

Specific redevelopment plans and a timetable aren’t yet clear, but the site is seen as an ideal site for mixed-use development, combining both commercial and residential spaces with open spaces in an “urban village” setting.

RK Midway’s active retail site comprises the largest chunk of the land: 19.8 acres. The Met Council owns the vacant 9.9-acre area long known as the “bus barn” site. The city of St. Paul’s Housing and Redevelopment Authority has an option to purchase a vacant, 4.8-acre site from RK Midway.

Meanwhile, the city of St. Paul issued a call this week for development proposals for the “Seven Corners Gateway” site in downtown St. Paul. The 2.4-acre site is currently a surface parking lot and is across the street from the Xcel Energy Center. Past development plans on the site have never panned out.

But the city is hoping to draw fresh interest: “The City of Saint Paul envisions a high-density, mixed-use site that evokes a sense of welcome and destination at this important gateway into downtown Saint Paul, mindful of its proximity to the St. Paul Cathedral and Capitol,” it said in a request for proposals. Proposals are due to the city by August 29.

At the Snelling and University site, the report’s recommendations include hammering out an inter-governmental agreement between the city of St. Paul and the Metropolitan Council and creating an exclusive negotiating agreement (ENA) to create a “road map” for how the three parties can work together on the site.

Donna Drummond, director of planning for St. Paul’s Planning & Economic Development department, said that the city is weighing the recommendations in the report.

“Ultimately there would need to be a master plan,” Drummond said of plans for the University-Snelling site. “There’s a lot in here to consider.”