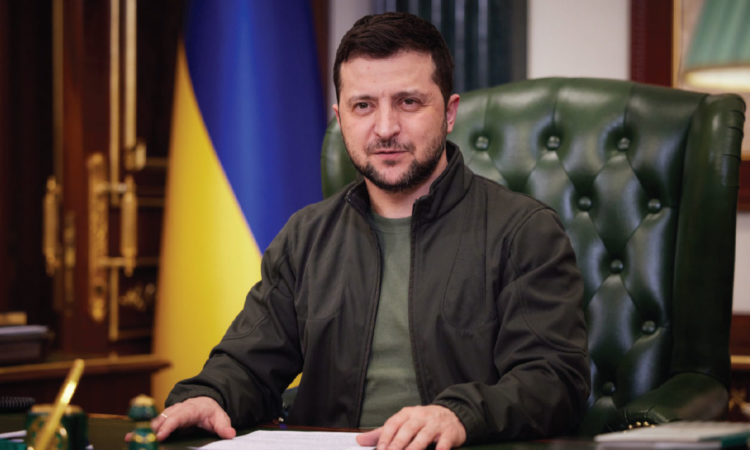 Russia’s unprovoked invasion of Ukraine will change our view of outrage.
By Vance Opperman
April 25, 2022

Dear President Zelenskyy:
You were the star in the political satire program Servant of the People, highly popular in both Ukraine and Russia. The program was a big joke about corrupt and incompetent government. But with the totally unprovoked and morally outrageous invasion of your country by the Russian military, we all hope the joke will be on Vladimir Putin. Peace has brought us the luxury of refined outrage. Here are some examples of how the invasion of Ukraine will change our view of outrage.

Defund the police. A great deal of political angst was devoted to last fall’s Minneapolis election, in particular to the move to amend the Minneapolis City Charter to “defund” the Minneapolis Police Department. The charter amendment itself was easily rejected by Minneapolis voters. There is no moral equivalency between individual acts of violence sanctioned by the state (by those dressed in police uniforms) and violence committed by a sovereign state’s entire military against a foreign population; nevertheless, scale matters. A civilized society can resolve questions of police brutality through the political process. And so the question remains, how do you defund Vladimir Putin?

The rainforest. We obsess every year over the loss of acreage in the Amazon rainforest and the consequence of that loss on the oxygen-generating “lungs of the world.” In one year alone an additional 8,000 square miles of the rainforest has been lost. These are serious concerns. But among the many war crimes committed by Vladimir Putin, the threatened destruction of 15 nuclear reactors in Ukraine should make us forget—at least momentarily—about the Amazon rainforest.

In the best of times, nuclear generating facilities pose their own grave dangers. Imagine trying to run one while under constant bombardment, with tanks rolling through your parking lot. And yet, that is exactly the situation in Ukraine, where news reports that Zaporizhzhia, the largest electricity-generating nuclear facility in Europe, is now being commanded by Russian troops. The country has 14 more of these reactors. Not all marksmanship in wartime conditions is 100 percent accurate. An errant mortar shell or other bombardment hitting a Ukrainian nuclear facility could become another Soviet experience—Chernobyl. Another Chernobyl will make us forget about the Amazon rainforest.

EDIB. For those not in the know, EDIB is a personnel selection process that emphasizes equity (E), diversity (D), Inclusion (I), and belonging (B)—the effort to make personnel decisions reflect our society at large. There is no question the arc of our progress has been too slow and imperfect. This issue and the use of arbitrary quotas to achieve someone’s ideal of EDIB is a matter of much debate (and possibly a future “Open Letter”). But in Ukraine, these are not debates anyone is likely to have. Putin seems to have taken EDIB to extremes; he will kill anyone regardless of background, language, culture, or perceived religion—a truly nondiscriminatory monster.

“In the best of times, nuclear generating facilities pose their own grave dangers. Imagine trying to run one while under constant bombardment, with tanks rolling through your parking lot.”

Fake news. It used to be a running joke that Russians claimed to have invented everything, from the radio to airplanes to scotch. It was such a cultural joke that one of the original Star Wars cast members, Chekov, was frequently the object of exaggerated invention-claim jokes. News reports have shown that some Russian citizens still believe many of these exaggerated claims. Fake news!

We have seen other examples of fake news. Dr. Anthony Fauci and Bill Gates have conspired to invent the hoax of a Covid vaccine for their own financial benefit. Others, including members of Congress, have said the insurrection attack on our nation’s capital on Jan. 6 was nothing more than a peaceful protest akin to usual tourist behavior. One individual even took his assault rifle to the Comet Ping Pong pizzeria to break up a pedophile ring run in the basement by Hillary Clinton! Others have said on major media outlets that the United States is funding biological weapon production in secret biolabs in Ukraine. Putin, for example, has claimed that Ukraine is run by an elite cabal of Nazis and that only his invasion will save us from them. (The only two countries where the top two government officials are Jewish are Israel and Ukraine.)

We have seen the fake news assault on truth in this country. There are credible sources of independently gathered and fact-checked news—we should support them. It is either that, or the Hillary Clinton-led Satanic Pedophile Democratic Party in league with Fauci and Gates will take over our government.

Democracy is hard. We know democracy is hard; history teaches us that. We have seen democracy snuffed out in some of the most educated societies on Earth—Germany, for example. We have seen demagogues harangue large crowds at night, making exaggerated claims that we are under attack by the “other.” Authoritarianism is on the march, and as one people, united with our allies, we can prevail once again.

The people of Ukraine and the servant of the people, Volodymyr Zelenskyy, have shown us what we can face—and how to respond. We are all Ukrainians now.