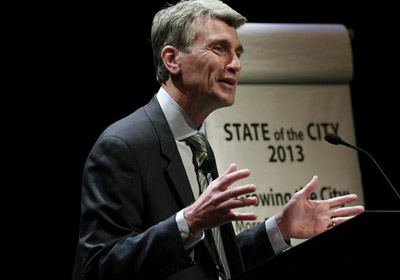 In his “farewell” State of the City address Wednesday, Minneapolis Mayor R.T. Rybak stepped ahead 12 years in time to look at the city of 2025 and then explained what needs to be done in 2013 to make that vision a reality.

In his Minneapolis of 2025, the North Side would be a population center with a grand boulevard called Penn Parkway, complete with walking and bike trails and flowering trees. There would be a new Target Tower in downtown, and his much-beloved streetcars would have become a reality.

Then Rybak, who is not running for re-election, stepped back into 2013 and explained what Minneapolis needs to do now to make that vision happen.

“You have to manage the money,” he said to his audience at the Walker Art Center.

During his 12-year tenure, Minneapolis has paid down $241 million in debt and cut spending by 16 percent. The once-broken pension system has been merged with the state fund, and Target Center has been moved off the tab paid by property taxpayers, saving them $5 million a year.

He also touted Minneapolis as a safe place to live—where violent crime and violence by youth have both decreased, and where 20 percent of the city’s police officers are now people of color.

He also renewed his call for an end to gun violence.

“This country is gripped in an epidemic of gun violence,” said Rybak, who will meet next week with Chicago Mayor Rahm Emanuel to discuss strategies for reducing gun violence.  “It is time to get something done.”

He recalled last fall's Accent Signage shootings  where injured worker John Souter lay bleeding on the floor thinking he might die. Souter looked up and saw a uniform that read “Minneapolis Police” and said he knew he was going to be safe.

“The Minneapolis Police made him safe,” said Rybak who then introduced Souter, who was in the audience along with Shereen and Sami Rahamim, the wife and son of slain Accent founder Reuven Rahamim.

Rybak said that Minneapolis needs to add 65,000 residents by the year 2025 to bring the population to 450,000. The increased population would reduce the property tax burden and attract jobs and development to the city.  Much of that development will be along transit routes that are now in the planning stages.

“We’re going to make it possible to live in this city without a car,” said Rybak, who sees streetcars playing a major role in transit. “They get people out of their cars but they also grow development along their routes,” he said.

Rybak also attacked the achievement gap in the schools where students of color test lower than their white counterparts.

“Of the top 20 metropolitan areas in this country, Minneapolis-St. Paul has the largest achievement gap,” said Rybak. “We are dead last.”

“This is a crisis, and we know how to respond to a crisis,” said the mayor. “It means that the very best teachers need to be in the classroom with the students with the most need.”

The speech got good reviews from some of the people who will have to deal with city problems in the year ahead.

“He focused on the stuff that’s really a challenge and I appreciate that,” said City Council President Barb Johnson.  “You could record your accomplishments, but he’s left us with things to think about and things to work on.  It was a good speech.”

“He talked about lowering taxes,” said Council Member Sandy Colvin Roy. “We’ve been carrying a heavier burden than individual homeowners should have to pay.”

“I think it was great,” said Council Member Don Samuels, who is running in the contest to replace the retiring Rybak. “He’s going down as one of the greatest mayors in the city of Minneapolis history.”

“I love the fact that it ended on such a high note because it could have been sad or not as positive,” said Council Member Meg Tuthill. “I thought he did a great job.”

“He got back to the core issue—it’s the achievement gap and multi-generational poverty that is really threatening the next generation,” said Council Member Gary Schiff, also a mayoral candidate. “If we don’t address it immediately, then we’re never going to move forward as a city.”

“He’s singing off our sheet of music,” said Mark Andrew, also a candidate for mayor.  “It’s very energizing to hear because our visions are so closely matched.”

“People have confidence in Minneapolis again,” said Council Member Betsy Hodges, also a mayoral candidate. “R.T. laid out, really clearly, how we’ve made the progress we’ve made, and we all share the responsibility to make sure we continue that progress.”