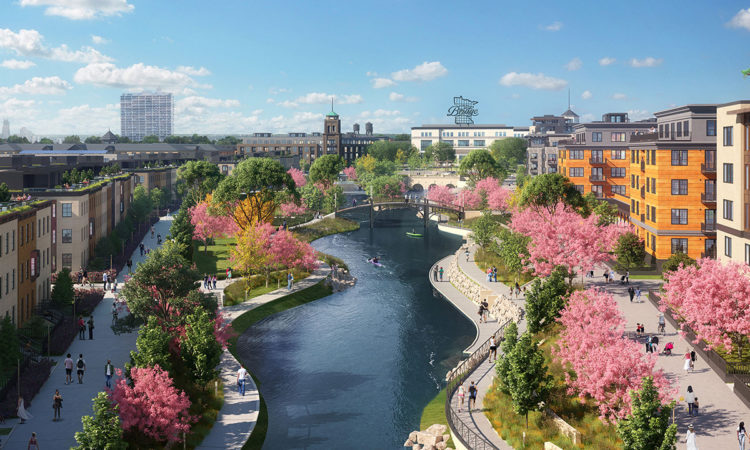 Maybe some long-term residents of St. Paul will always call it the Ford site. But on Tuesday, Minneapolis-based Ryan Companies US Inc.—the master developer for the redevelopment of the 122-acre site—revealed its new name for the project: Highland Bridge.

The new name reflects where the site sits. The property is in the Highland Park neighborhood of St. Paul and just steps away from the Ford Parkway Bridge.

Ryan billed the announcement as its first-ever “virtual groundbreaking,” with the release of a 14-minute video. St. Paul Mayor Melvin Carter, clad in a construction hat, glasses and vest, appears in the video.

Ryan also named two new housing project partners. Pulte Homes will be the lead developer for rowhomes at Highland Bridge; Roseville-based Presbyterian Homes & Services will be the owner and operator of the project’s senior housing. Pultegroup Inc. is based in Atlanta but has a large presence in Minnesota.

Pulte plans to build approximately 320 rowhomes on the site. Construction is slated to start this winter with homes available for closing the following winter.

Ford Motor Co. shut down the plant, which had been in operation since 1925, in December 2011. The city of St. Paul named Ryan Companies as the developer of the site in 2018. Ryan Companies paid $61 million to acquire the site from Ford.