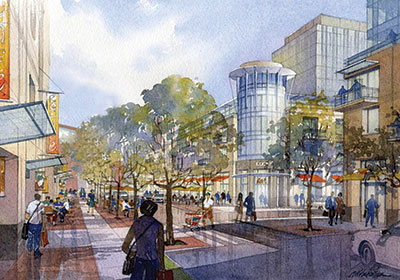 One goal is attracting people to Rochester who don’t have a reason to be at Mayo Clinic.
July 04, 2014

The city of Rochester is known for world-class medical care, not cutting-edge urban design. But now a prominent national design firm has been tapped to lead planning for the $6 billion, 20-year Destination Medical Center plan.

“Our focus is going to be on creating iconic places,” says Peter Cavaluzzi, a design principal with EE&K, an affiliate of Perkins Eastman Co., an international planning, design and consulting firm. “It’s iconic places where the buildings and the [public] spaces are designed together.”

Rochester’s Destination Medical Center Economic Development Agency chose EE&K, which has principals in New York and Washington, D.C., in April as the master planner for the ambitious, long-range vision to overhaul and update the Mayo Clinic-anchored southern Minnesota city. Cavaluzzi and EE&K have tackled some big projects, including Baltimore’s Inner Harbor East, CityCenter in Las Vegas and Battery Park City in New York. Where does a Midwestern town like Rochester fit into those big designs?

“All of those projects were transformational projects,” Cavaluzzi says. “All of the characteristics of a destination city are sort of there [in Rochester], they just need to be nurtured and enhanced and extended.”

The architect has local connections. He earned his undergraduate degree from the University of Minnesota in 1984 (when the program was still led by the late Ralph Rapson), before earning his master’s at Columbia University. “The School of Architecture and Ralph Rapson really emphasized thinking big,” Cavaluzzi recalls. Cavaluzzi also led the design of Target Field Station in downtown Minneapolis, which opened in May.

“Peter and his team . . . have a long history of doing urban design turnarounds,” says Thomas Fisher, dean of the College of Design at the University of Minnesota. “They’re, I think, a great choice for Rochester.”

Cavaluzzi says one of his goals is to draw people to Rochester who don’t have a reason to be at Mayo Clinic: “The true measure of success is if we can attract people who aren’t even going to those major institutions.”