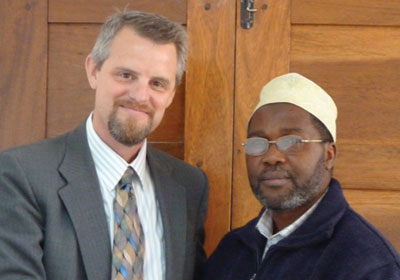 Ray Menard Is Investing in Sufficiency

Why haven’t countless aid and development projects and millions of dollars been able to solve intractable poverty in East Africa? That puzzle confronted Ray Menard when he visited Tanzania in 2008 during a church mission trip. But the Hastings native also saw enormous economic potential.

“As a businessperson, what I saw was opportunity everywhere, but this painful paradox of nothing being developed,” he recalls. Menard, who spent the last 30 years helping startups succeed, began mulling how he could unwind the paradox and solve widespread social problems.

Menard says he experienced a spiritual calling to apply his entrepreneurial expertise—developed in industries from medical devices to high tech to call centers—to support developing countries. “I wandered around this country for the first year, just trying to sort out where I could have the most impact,” he says. Menard met small-scale farmers unable to move their crops to customers without exploitative middlemen. They told him of abundant produce left to rot in the fields because there was no way to preserve it—yet nearly 40 percent of the population is malnourished during the dry season. He also learned of an overwhelming need for basic health care.

In his peregrinations, Menard identified a critical gap in Tanzania’s economic structure, between microfinance investments and high-return venture capital—known as “the missing middle” in development parlance. Menard says microfinance loans are barely enough to buy a sewing machine in Tanzania. “It’s not a meaningful amount of money in terms of creating a manufacturing or business base for [a] village,” he explains. At the other end, venture capitalists expect 40 percent returns.

To address the missing middle, Menard founded Cheetah Development, which uses what it calls “microventure capital” to start businesses that can help Tanzanians earn enough to pay for health care and a nutritious diet. His credo is simple: “I believe there’s only one definition of sustainability—it’s called profit.” Menard thinks that a profitable business model is the way to break dependence on short-term donations and projects that don’t build local capacity.

Cheetah is developing six business models, including cooperatives that aggregate crops from small-scale farmers to sell directly to food processors. With their profits, the farmers can fund health care for their families or education for their children. Cheetah’s track record has inspired a local bank to commit $10 million in loans to farmers.

Other Cheetah startups under development include food preservation businesses that use a solar dehydrator invented by Menard (who already has 14 patents); a factory that will produce a patent-pending bicycle capable of carrying 1,000 pounds of crops at a time; and a repair business to service wells that aid organizations have built throughout the country. Cheetah also is working with an organization called MicroEnsure to develop health insurance. “We can’t address everything, but 80 percent of the people die from something that could be cured for around $5,” Menard says.

Cheetah will retain controlling interest for one year after each company reaches profitability, then shift it to the local owners. “We’re not trying to be a company that we start and run ourselves—we’re trying to invest in companies that start and run themselves,” Menard says.

Mark Ereth, an anesthesiologist and a professor at the Mayo Clinic College of Medicine, was one of the first people Menard called after his initial trip to Tanzania. Ereth recognized the promise in the microventure capital model and agreed to be the founding chair of Cheetah’s board of directors. “I’m totally convinced that this is the only solution to the world’s poverty problems, because nothing else works,” Ereth says. Cheetah is seeking donor and volunteer support for the next few years, until some of its businesses are self-sustaining. “We’re asking donors to contribute to help us make this thing go,” Menard says. “But our objective is not to turn into an aid organization that continues to ask for money; we think that in seven years we won’t need to ask for money again.”

Menard now lives about three-quarters of the year in Tanzania, while his wife remains in the Twin Cities. “I’ve spent my life making rich people richer,” he says. “It seemed like it would be a good thing to make poor people richer.”