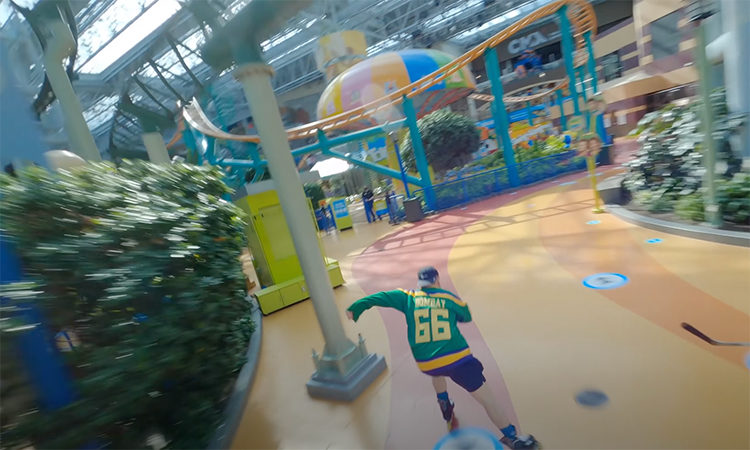 The new drone clip pays homage to The Mighty Ducks, the ‘90s hockey film shot in the Twin Cities. YouTube

In the wake of its Bryant Lake Bowl success, the Minneapolis production company pays homage to Minnesota with a flight through the Bloomington megamall.
By Jenna Grundtner
April 29, 2021

Rally Studios, the Minneapolis production company behind a recent viral video of Bryant Lake Bowl, is documenting another Minnesota icon: the Mall of America.

The company’s latest drone video takes viewers on a flight through the Bloomington mall and its indoor theme park, Nickelodeon Universe.

Chris Grap, lead storyteller and experience designer at the Mall of America, said that the viral bowling alley clip and the evident passion behind it inspired him to work with Rally Studios.

“I’m a huge fan of Bryant Lake Bowl, and the reasoning behind Rally Studios working with them showed who they are: honest, passionate, compassionate storytellers from our community,” Grap said. “They love Minnesota; they love Mall of America. Working with them to help them achieve their vision was a privilege.”

The new video begins with footage of the “Kaleidoscope” public art installation before zooming into Nickelodeon Universe, the 7-acre theme park inside the mall. Titled “The Quack Attack is Back,” the drone video pays homage to—you guessed it—The Mighty Ducks, the classic ‘90s hockey movie shot in the Twin Cities.

The Rally Studios team aimed to highlight their nostalgia of growing up in Minnesota and frequenting Mall of America.

“Our entire team has always been huge fans of Mall of America and dreamed of setting up a drone shot there even before the Bryant Lake Bowl footage caught like it did,” said Jay Christensen, aerial cinematographer and drone pilot at Rally Studios, in a news release. “Working with the mall was a collaborative effort that brought together like-minded folks who wanted to try making the seemingly impossible possible. And that’s just what we did.”

Grap said he hopes the collaboration brings a sense of joy and excitement to viewers. He said this won’t be the last time the teams work together.

“There are definitely more icons throughout Mall of America waiting for their time to shine,” Grap said.

Last month, Rally Studios made international headlines for its swooping footage of Bryant Lake Bowl & Theater on West Lake Street in Minneapolis. The video, called “Right Up Our Alley,” has now been viewed nearly 2 million times on YouTube alone, and even received praise from James Gunn, the director and screenwriter behind Guardians of the Galaxy and Suicide Squad.

The bowling alley clip was shot as part of a project to support iconic Minnesotan businesses hit hard by the Covid-19 pandemic and subsequent social unrest.

Two weeks ago, Rally Studios auctioned off the video as a non-fungible token (NFT) with the intention to donate all proceeds to the Lake Street Council, a Minneapolis nonprofit that supports local entrepreneurs and artists. The unique piece of digital artwork sold for 2 Ethereum, valued at about $4,670.