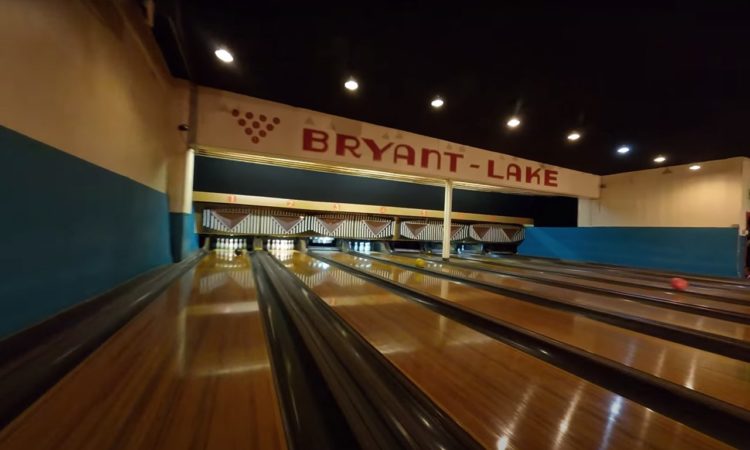 Rally Studios’ drone clip of Bryant Lake Bowl is being sold as an NFT, or non-fungible token, to benefit the Lake Street Council. YouTube

Rally Studios, the Minneapolis-based team behind the viral clip, will auction the video off as a unique piece of digital artwork, with all proceeds going to the Lake Street Council.
By Dan Niepow
April 14, 2021

A drone video of Bryant Lake Bowl last month took a small Minneapolis production company to the height of viral stardom. The clip, called “Right Up Our Alley,” went on to earn nods from Hollywood directors and media outlets around the world. Now, the video will soon be immortalized as a unique piece of digital art.

On Friday, Rally Studios — the company behind the drone clip — will auction off the video as an NFT, or non-fungible token. The auction will last for 24 hours. The winning bidder will become the exclusive owner of the video, but don’t worry: It’ll still be on YouTube.

Brian Heimann, executive producer at Rally, said the company didn’t originally have plans to sell the video as an NFT. “It certainly wasn’t on our radar,” he told TCB. But, after the video went viral, his company received inquiries from a number of cryptocurrency auction sites looking to put the clip up for sale as an NFT. Eventually, Rally landed on platform called Foundation.app, which recently sold an NFT of YouTube star Chris Crocker’s famous “Leave Britney Alone!” clip for more than $41,000.

“Foundation is proud to host ‘Right Up Our Alley’ as a hallmark video addition to our NFT community,” said Foundation’s Charles Damga in a statement. “Welcoming this living piece of the internet from Rally Studios is a fantastic application of the network NFTs are connecting.”

In Heimann’s view, the auction is a positive way to capitalize on the viral success of the video. All the proceeds from the auction will be donated to the Lake Street Council, a nonprofit that’s already distributed millions of dollars to businesses and nonprofits in the area.

“It seemed like an idea that could kind of perpetuate the success of the video and demonstrate a little about what Rally stands for, and provide a decent follow-up on why the video was made in the first place,” Heimann said.

Jay Christensen, aerial cinematographer and drone pilot at Rally, said he’s been filming drone clips of the Lake Street neighborhood for several months. He even grabbed some overhead shots of fires and destruction during the protests in the wake of George Floyd’s death in Minneapolis police custody in May. But Christensen isn’t an out-of-state voyeur; he’s a resident of the neighborhood, so he feels a personal connection to the businesses there.

“In parts of Lake Street, it still feels like a war just happened there,” he says. “I’ve been really passionate toward these one-take shots of the neighborhood.”

Experts have likened NFTs to original, non-replaceable pieces of art, like a painting in the Louvre in Paris or at the Minneapolis Institute of Art. You can, of course, still buy a print of the Mona Lisa or any piece of art at Mia, but the original pieces still belong to the museums. Technology news outlet The Verge described NFTs this way: “Anyone can buy a Monet print. But only one person can own the original.”

It’s a relatively new concept that’s steadily gaining traction in the digital art space. An NFT of the once-viral “Nyan Cat” clip recently sold for more than half a million dollars. Artists from Grimes to Deadmau5 are also hopping on the NFT bandwagon. NFTs are purchased with the cryptocurrency Ethereum, which can be exchanged for real-world dollars.

NFTs are said to give artists more flexibility in pricing. And, in the case of the Bryant Lake Bowl video, sales will also help support local businesses hit hard by the pandemic and civil unrest.

“Historically, brands and advertising agencies are able to set flat rates and push artists into certain vertical of pricing,” Heimann said. “This is an opportunity to let the free market dictate what their talent is worth. That really resonated with us.”

The last few weeks have undoubtedly been a whirlwind for Rally, a team of just seven. Along with getting a Twitter offer to help film the new Guardians of the Galaxy movie in London, the company has been getting proposals from several big-name brands, Heimann said. But, as a self-described “project-based gig shop,” the Rally team is used to business fluctuating throughout the year. The company often adds on a few more staffers during busier times, Heimann said.

What’s next for Rally? Hopefully, more videos of Minnesota businesses and organizations, alongside a smattering of deals with various national brands and entertainment projects.

“We’re getting offers coming in from all around the world, but, I still like to do the Minnesota stuff,” Christensen said.

Meanwhile, the Lake Street Council welcomed the news of the donation. In a statement, the organization said Rally Studios’ video gives international attention to a “Lake Street cornerstone.”

“We look forward to a blooming partnership with Rally Studios,” the organization said.