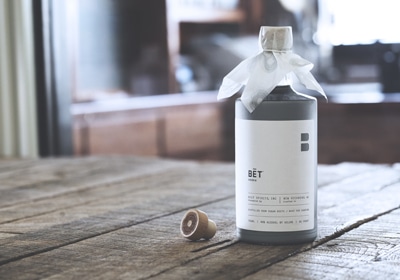 The craft spirits owner discusses how his brand is making a name for itself by skipping beer in favor of vodka.
February 04, 2016

Minnesota is in the midst of a craft beer and spirits boom, and entrepreneurs are starting to get innovative to set themselves apart. Ben Brueshoff and Jerad Poling, founders of BET, are no exception: They’ve spent the last two years creating a vodka made from distilled sugar beets. Less than one month after launch, dozens of Twin Cities liquor stores now carry the spirit, which retails for $30 to $34. Brueshoff talked to TCB about why the company chose to produce vodka, the challenges of running an alcohol-based business and why he believes BET is ahead of the curve.

TCB: What was the idea behind distilling sugar beets into vodka rather than more conventional crops? And what pushed you to start with vodka instead of another liquor?
Brueshoff: We noticed what was occurring in the craft beer industry and we were very drawn to the social element of people coming together and sharing a drink with others. We felt, however, that the beer scene was quite saturated and a year or two too late, while, on the other hand, at the time of our early discussions (in 2013) there were literally only a select few craft distilleries in the entire state such as Prairie, Panther, I think. We drew from Jerad's distilling experience and we decided that it would be a great opportunity for us to be on the leading edge of a post-prohibition renaissance. In other states, the craft spirits industry was beginning to take off and we knew it would only be time until it would arrive in Minnesota (for example, Portland had approximately a dozen distilleries at the time and is a similar market to the Twin Cities in terms of socio-economics and culture). We also knew that we needed to be different while maintaining a local element and story. In doing research we discovered that Minnesota is the largest producer of sugar beets in the United States. And, it just so happens that sugar beets turn out to be a very pure and ideal base crop for the creation of alcohol. Vodka is the largest spirit in terms of consumption and is very versatile, which means that we could reach more people and create more social experiences than other liquor types. Additionally, certain liquors require specific ingredients (i.e. rum must be made of sugar cane) and for us, we wanted to focus on making a spirit out of sugar beets.

How have customers responded to your product, including those who are not particular to vodka?
Doing something different provides opportunity. Early on, we were recommended two books to read by Kieran Folliard, the founder of 2 Gingers Irish Whisky. One called “Purple Cow” and the other, “Blue Ocean Strategy.” Both of these books talk about how you need to be very focused and also very different in order to be noticed. So although it may seem safe to be like everyone else, it is in fact the far more dangerous route to take. That is why we elected to use only sugar beets when no one else in Minnesota is; why we went very literal with our brand name (BET is the phonetic spelling of “beet”), why we used a full letterpress label which is very challenging but very unique—and to our knowledge never been done before—and why we contract distill versus having our own building, unlike nearly everyone else here locally. We have had very, very good feedback both in terms of the visual appeal of the bottle—one person said it was like an Apple product in its simple and refined beauty—and in terms of product taste. I recently received emails from two customers, who we call “pioneers.” One said tongue-in-cheek that “BET can't be beat!” Another said that they did a blind taste test between Gray Goose, Chopin, Tito's and BET. Our vodka was preferred by everyone. Even non-vodka drinkers are pleasantly surprised because of the more subtle profile and good mouth-feel.

Does BET have plans to create any other liquors?
As of now, no. First and foremost, it is very important for us to create a singular brand experience for our consumers — and to execute it well. As a business it is very easy and tempting to try to do too many things. Vodka is the most consumed spirit—about 55 percent or so market share versus other spirits—but it is also somewhat misused or under-appreciated. We have crafted a product that tastes much different than what people are used to in the vodka category. BET is a sipping vodka that can be enjoyed neat and our recipes highlight a “less is more” mindset. That is, fewer ingredients that are easy for people to make and that highlight the nice profile of the vodka itself. There is a lot of opportunity to shift the false perception that people may have about vodka due a bad experience with other tasting vodkas. We are a premium-pour product to be sipped and shared in a sincere and social setting.

The company appears to embrace a pioneer and heritage culture. Could you explain more about your brand?

Every company needs a legend and a link to the past. Ours is Henry Oxnard, who pioneered the sugar beet industry in the Midwest and was a catalyst for the industry in Minnesota. Today, heritage products are grabbing a foothold in modern society. Knowing that a product represents something bigger and more profound than itself is important. For us, our legend is Henry. He is the link from the early days of the sugar beet industry to today and our pioneering sugar beets into premium-pour vodka. When we say, “Share the Pioneering Spirit,” it is partly in reference to the literal sharing of our vodka. But digging deeper, it refers to Henry Oxnard as the original sugar beet pioneer and his spirit of industry.

BET was made possible through partnerships with sugar beet cooperatives. How did you forge those relationships, and how crucial will that be in your long-term success?
Early on, we connected with the largest co-op in the nation, which is based in northwest Minnesota. We visited the fields and learned about the industry. Over 3,000 farming families comprise this co-op and it is a very important economic driver for much of western and northern Minnesota and beyond. It's an industry that people know very little about, surprisingly. When we say “sugar beets” we often get people assuming our vodka is purple in color! There's a big different between purple-colored beets that you'd buy in the grocery store and sugar beets. Staying true to the origin of our sugar beets is very important, because we are proud to be living in a state that leads the nation in sugar beet production. Although other states also produce sugar beets, we intend to remain rooted here locally.

What are your operations like at the moment?
We made the business decision to take our recipe and contract distill with 45th Parallel Spirits in New Richmond, Wisconsin. Interestingly enough, some of the leading breweries in the Twin Cities today also took this route early on. Paul, Scott and team at 45th Parallel were among the first in the craft spirits industry here locally when they started up nearly 10 years ago. They are arguably the most talented distillers in our region and we knew that they could help craft something exceptional. Timing is everything, too, and when we approached them they just so happened to be open to our unique offering. We source the raw goods and send to 45th Parallel and they then ferment, distill and bottle BET vodka. Jerad and I go out frequently to ensure quality control before it is then boxed and shipped out with our distributor and into liquor stores, bars, restaurants, etc.

What are the challenges the company faces in selling product to liquor stores? Do you plan on opening a distillery tasting room?
Right now, we are focused on developing and sharing a great brand experience rather than a brick and mortar building. We started this business to bring people together through a sincere and simplified sipping experience. So for us we do not want to be focused inwardly on the daily operations of operating a building. It's the opposite of a “build it and they will come” ethos. Instead, we want to be free to go to where our consumers are and connect with them in their environment via demos, tastings, special events, private functions, collaborative partnerships with other local business, etc. Our main challenge in selling to liquor stores has been timing and the perception around vodka. Winter is a bit of a lull in the spirits industry and many retailers are slow to take orders. Similarly, people have a very set perception around what vodka tastes like, and although ours is positively different, it can be a challenge to break the mindset—until they see it and taste it, of course.