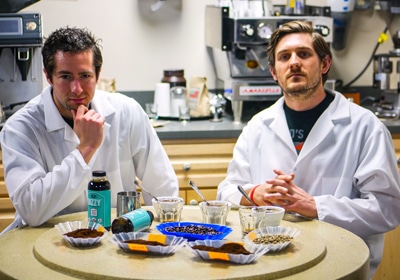 The coffee startup aims to be a healthier alternative to energy drinks and carbonated beverages, while supplying a natural energy boost for work and workouts.
By TCB Staff
March 31, 2016

Two young entrepreneurs and childhood friends are creating a buzz with a twist in the Twin Cities’ beverage scene. Alex French and Andrew Healy’s startup, Bizzy Coffee, is taking on the likes of Starbucks, Caribou and Dunn Bros. with a cold-press coffee subscription service for the on-the-go caffeine addicts.

The service launches this month after years of preparation here in Minneapolis, as well as at FOOD-X, a food business accelerator program in New York. While French was navigating them home from a road trip to San Francisco, Healy talked with TCB about overcoming funding hurdles for the beverage startup, why they chose a subscription-based business model (rather than the traditional retail route) and how 2 Gingers Whiskey creator and restaurateur Kieran Folliard became their mentor through a bit of neighborly appreciation.

The two of you took brewing classes at places like Peace Coffee as you were kicking off Bizzy. How crucial was it to grasp essential brewing techniques before building your business?

That was a super important part. When we first started making cold brew at home, we were kind of crude about it, but when we got serious about the idea the first thing we wanted to do was educate ourselves. That’s when we took a deep dive into becoming cold brew coffee experts. It started with a couple coffee tasting and cupping classes. We talked with some of the local producers and tried to educate ourselves on coffee in general. And then [as we looked into] into cold brew, we saw that there wasn’t an authority out there that was classifying cold brew or making the best cold brew.

Not long after that, the two of you became one of 10 applicants selected for a food accelerator program called FOOD-X. How did this unique experience shape Bizzy?

The accelerator was at a critical for us because it came at a tipping point for the business. We had been working on it part time for a little over a year and a half. And it’s really tough when you’re funding it yourself and working on the idea while you’re working a day job—you just can’t go as quick as you’d like. We had gotten to the point where we needed to do our first production run and go through regulatory [procedures], but we needed more capital than we had personally. It became a make-or-break time for us. If we couldn’t raise the money to do the production run, the idea probably would have died right then and there. We originally had applied for the program in the spring. When we interviewed, we found out they wanted us to move out to New York then, but it didn’t make sense to move right away. In the fall, they gave us a call back and asked if we were still interested and then the timing was right. They reached out to us on a Friday, by Monday night they gave us the offer we asked for, and on Tuesday Alex and I had put in our resignations at work. It all happened really quickly.

Can you clarify on the offer? What exactly were you and Alex asking FOOD-X for?

Basically we needed capital for costs associated with the physical product, and it required more money than, let’s say, an app for a startup software company. They [at FOOD-X] participated in the $200,000 CLN [a type of funded credit derivative] that we raised. And that $200,000 almost solely went into product development and getting the website built up. Because it’s a beverage company, it’s difficult to bootstrap and that’s one thing we had to work really hard on: finding a copacker. Especially one that could not only produce the product, but they had to be certified organic, which made the list of copacker options a lot shorter. Ultimately, we had to find someone who really believed in the product because they needed to do a much smaller run size than they typically would simply because we didn’t have the capital to run hundreds of thousands of units right away. When you’re doing a food or beverage company, I think one of the biggest challenges is going from zero to hundreds of orders because you can’t make it all yourself. As a startup, you can’t afford to put that much money into inventory when you don’t have the sales yet to justify it.

Getting into distribution, can you describe Bizzy’s subscription-based business model? How did you come to this approach and why?

The subscription model is probably as important of a decision as the product itself. One thing again with the physical product, when it comes to food and beverage, distribution is a big hurdle. Traditional distribution into retail can be very challenging and another very expensive part. Most of these retailers only work with distributors, so that means you have to get your product to a distributor that will get it to a retailer, and both of those steps are going to take margin out of your product. On top of that, it is a very slow process. A lot of these systems [retailers and distributors use] have been built out very archaically—at least in our eyes—and they only favor the big people who can pay to keep their shelf space. We really tried to go retail off the bat thinking we’d go into Big Box, and all of the soft retailers and all of the grocery stores. The conversations went well when we were out in the accelerator, but most of these national retailers work six months out or more. And it’s not a very conducive model when you’re starting out and you have to wait six months before you can start selling your product.

But does this mean in six months or a year you might move onto retail shelves?

Yeah, retail is definitely in the cards longer term. But with such a long wait time, we immediately looked at ecommerce to get the product to market quickly and then go back to the retailers with more leverage because we’ve already started to build a brand.To your knowledge, are there any businesses similar to yours on the market today?

We went into the accelerator 100 percent set on retail and left with a functioning ecommerce store ready to roll. Then almost immediately after we launched our ecommerce store, customers started requesting automated orders, or essentially a subscription service. So we quickly started redesigning the website to incorporate the subscription service. And the more research we did the more excited we got because there is no one who can do a subscription cold brew the way we can. Of the 22 to 34 year old demographic that like cold brew and that we are targeting, 30 percent of those people already shop online [for groceries]. So we think we are giving them the product they are looking for and distributing it to them the way they want it.

Was it through FOOD-X that you met with Kieran Folliard (Founder of 2 Gingers whiskey and Minneapolis restaurant Kieran’s)?

We actually met him almost a full year before we did the accelerator. Alex and I had been perusing on Craigslist to get into the Lowry Hill area because the network in that neighborhood is just amazing and if we could get our foot in the door there it would help our entrepreneurial ventures. We had found an old mansion that we rented out and we basically brewed a bunch of coffee and went door-to-door giving out coffee samples and introducing ourselves. That is ultimately how we ran into Kieran and he ended up advising us from there. I think he was most excited by our bootstrapping spirit by going door-to-door. And he saw the opportunity in coffee—there’s a lot of data showing the growth in cold-brew coffee.

Let’s talk numbers. How much does the product cost, and how many people are buying it?

So far we are really happy with how the launch has gone this March and right now we are dead-set on getting the first 10,000 subscribers. We sell a four-pack of our cold brews for $35.99 and it varies in subscription frequency varying from every week or every eight weeks. So basically our goal is to get 10,000 subscribers ordering on a monthly basis for $35.99. And that’s what we’re excited about: the reoccurring revenue.