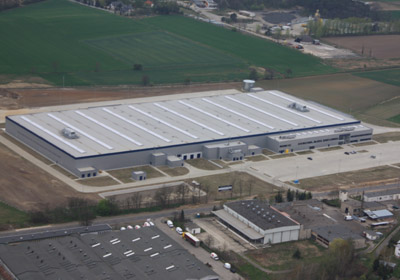 Polaris Making Vehicles On Another Continent For First Time

The bulk of its sales occurring in North America, the off-road vehicle maker will begin producing in Poland in early 2015.
October 03, 2014

Polaris Industries will begin making off-road vehicles outside of North America for the first time as it aims to increase sales abroad. The Medina-based manufacturer of recreational vehicles announced Tuesday that it had already begun training employees at a new 345,000-square-foot plant in Opole, Poland.

The company said it will employ 300 people at the plant in 2015 and plans to begin shipments to customers in the first quarter of 2015. Polaris said its goal is having a third of total sales coming from outside North America.

“The Opole facility is a cornerstone for our international growth plans, as it provides both a timely capacity increase and a localized manufacturing presence,” Polaris Chairman and CEO Scott Wine said in a statement.

There is work yet to be done for Polaris to realize its international sales goals: For the six-month period ending June 30, 18 percent of Polaris’ total sales, or $335.6 million, came from outside of North America—up from $249.9 million, or 16 percent of total sales, for the same period in 2013. In a quarterly report filed in July, Polaris said quarter and year-to-date sales in other foreign countries, primarily in Europe, climbed because of increased sales of off-road vehicles in both the Europe, Middle East and Africa, and Asia Pacific and Latin America regions.

The company’s Opole plant will produce about 35 different off-road vehicle models next year to be shipped to six subsidiaries and more than 30 distributors in Europe, Africa and the Middle East. The site will also house research and design for those markets. Suresh Krishna, a regional vice president, said in a statement that the new manufacturing presence would allow the company to source more parts locally and develop products specifically for the region’s markets.

The facility took a little more than a year to construct, Polaris said. It’s built on nearly 30 acres and features a 2,500-meter product test track and energy saving paint systems. The plant has the capacity to add another 200 employees.