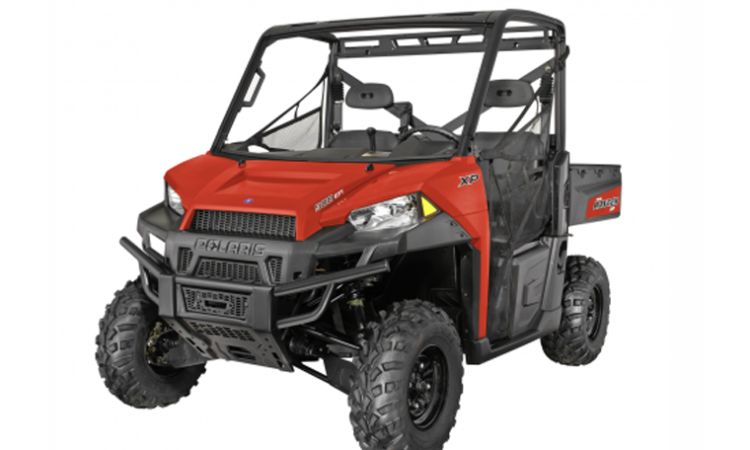 The recalled 2014 Ranger XP 900 by Polaris. (Photo from the Consumer Product Safety Commission)

The lawsuit was filed days after the company was hit with a $27.3 million punishment from government.
By Amanda Ostuni
April 09, 2018

Polaris’ mismanagement of faulty vehicles on the market continues to kick up dust, as a group of consumers filed a class action lawsuit against the company late last week. The suit alleged that the Medina-based off-road vehicle manufacturer knew or should have known about a fire and safety-hazard design defect in several of its models.

“Polaris has continued selling Ranger and RZR off-road vehicles with ProStar engines, despite knowing that they suffer from an acute risk of catching fire,” said Adam Levitt, co-counsel to the plaintiffs and co-founding partner of DiCello Levitt and Casey. “Our lawsuit hopes to force Polaris to seriously confront this issue and to start putting its customers’ safety above corporate profits.”

The suit was filed in U.S. District Court in Minneapolis Thursday, just days after Polaris accepted a $27.25 million civil penalty issued by the Consumer Product Safety Commission (CPSC). That claim focused on the company’s alleged failure to quickly report defects in its vehicles, as TCB reported last Tuesday.

The faulty vehicle lines referenced were RZR and Ranger – the 2013 to 2016 RZR 900 models, and the XP 900, XP 900 EPS and CREW 900 models. The Commission believed Polaris knew early on about overheating issues in the product lines but did not report the problem until after reports were made of 150 vehicle fires, 11 burn injuries, a fire that consumed ten acres of land, and a fire that killed a 15-year-old rider.

The class-action lawsuit, which represents about 300,000 consumers who owned Polaris vehicles between 2011 and 2018, raises the accusation stakes. It claims the faulty products caused “more than 250 fires, more than 30 severe injuries and at least three deaths,” reported the Star Tribune.

Unlike with past legal actions taken against Polaris for vehicle incidents, the three lead plaintiffs in the suit – James Bruner of Tallassee, Ala.; Michael Zeeck of Rushville, Ill.; and Ed Beattie of Chappell, Neb. – didn’t personally experience bodily harm from the ill-fated machines but cited economical suffering because they would not have bought the vehicles if they knew of the issues.

It’s alleged that even though Polaris recalled faulty vehicles, but never addressed the root problem – what was causing the fires. It alleges that the problem lay in an engine redesign that Polaris began incorporating in its vehicle models as early as 2011.

The ProStar engine built into these models was unusually high-powered, and tucked directly behind the occupant compartment, the plaintiffs noted. The design rerouted exhaust gas pipes so they traveled toward the occupants, then turned 180 degrees, in a U-shape before exiting from the rear.

Plaintiffs stated their belief that the motivation behind using this design was to save money, and it was built hastily and unwisely “in-house rather than outsourcing.”

Polaris did recall faulty Ranger vehicles in 2016, and in the wake of the CPSC decision, recalled Razer models, but despite that and accepting the monetary penalty, it hasn’t yet admitted to the charges against it.

In a prepared statement responding to the CPSC action, Polaris CEO Scott Wine said, “We are dedicated to leading the industry, not only in innovation and performance, but in safety and quality — because we will accept nothing less. I am extremely confident in the strength of our organization, the quality of our products, and the 11,000 employees who champion the principles and values that embody Polaris.”

The Star Tribune noted that in the past two years, with a focus on improving safety, Polaris enhanced and centralized its product safety program, created a new product-design process, hired 200 additional quality and engineering experts, enhanced post-sales surveillance and data analysis and invested in new tools and processes.

Following the CPSC settlement, though, it’s agreed to work with the federal consumer protection agency to even better improve its processes.

The new class action lawsuit has been assigned to U.S. District Judge Wilhelmina Wright. Adam Levitt is joined in representing the plaintiffs by co-counsel, W. Daniel “Dee” Miles, III of Beasley Allen Law Firm. The plaintiffs have requested a jury trial and are seeking unspecified punitive damages. Polaris has not yet commented on the allegations mentioned in the proposed class action suit.