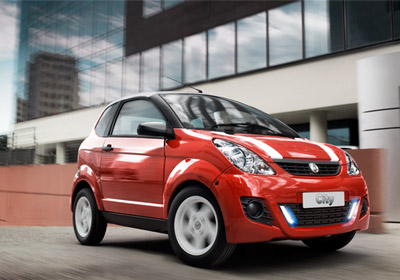 Aixam Mega, which is based in Aix-les-Bains, France, sells “quadricycles” and light-duty commercial vehicles throughout Europe. Quadricycles are essentially small cars that have very low top speeds and require only a Moped license, rather than a traditional driver’s license, to operate in most European countries. The company markets the vehicles to those who live in urban areas or those who are too old or too young to drive a traditional car. The vehicles come in diesel-fueled or electric models and range in price from about $10,000 to roughly $26,000.

Financial terms of the cash transaction were not disclosed. Medina-based Polaris said it expects the acquisition to boost its earnings per share in 2013, after acquisition costs. Shares of Polaris’ stock were trading up about 2.5 percent at $89.99 mid-day Thursday following the acquisition announcement.

Aixam Mega was founded in 1983 and had about $110 million in sales in 2012. Last year, it distributed vehicles through a network of about 400 European dealers.

“Aixam Mega is an excellent fit with Polaris and offers a unique opportunity for us to expand our small-vehicle platform and accelerate international growth,” Polaris Chairman and CEO Scott Wine said in a statement.

Polaris is recognized mainly for its recreational vehicles, especially snowmobiles and off-road vehicles, but it has recently been expanding into the commercial vehicle market. In March, Polaris partnered with Bobcat to launch a new line of commercial utility vehicles, called Brutus. In 2011, the company bought Global Electric Motorcars and Goupil Industrie SA, which both produce electric vehicles used for commercial purposes.

Twin Cities Business' upcoming May issue takes an in-depth look at how Polaris, which began as a snowmobile maker, is now the number one powersports company in the United States—and speeding toward becoming a global small-vehicle manufacturer. The May issue will hit newsstands later this month.