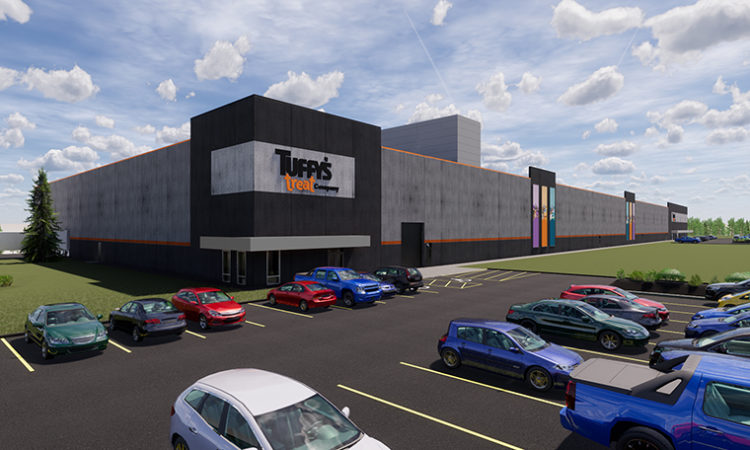 Rendering of the company's planned facility in Delano, Minnesota.

On August 7, the company will break ground on a $60 million pet treat facility in Delano. The new plant will have the capacity to produce about 25,000 tons of dog and cat treats each year, says Charlie Nelson, president of Tuffy’s parent company KLN Family Brands. The 170,000-square-foot facility is slated to be completed by November 2020.

The company has chosen to build the new facility near the Twin Cities to gain access to much-needed workers, Nelson says.

“Currently, we as a community have more jobs than people,” he says. “Workforce is tight in our area.”

At the outset, the company aims to hire about 50 new employees at the Delano plant. Within the first couple years, KLN plans to hire more than 100 additional workers, Nelson says. The company currently employs about 500 workers between its existing facilities in Perham. (KLN operates a pet food plant and a candy plant in the city.)

KLN’s focus in Perham is on whole-meal pet foods, while the new facility will produce primarily soft treats for cats and dogs, as well as training treats. Nelson notes that the company’s Perham plant is at capacity.

“We are limited with capabilities in Perham,” he says. “We thought this was a good opportunity to really start fresh.”

KLN officials hope the Delano facility will enable the company to “considerably” ramp up pet treat production. The company has contracted with CRB to build the new facility.

The city of Delano has proposed a tax increment finance district to help pay for the infrastructure needed to facilitate the new plant, said Tami Kalina, chief financial officer of KLN Family Brands.

“The City of Delano has offered assistance in many different directions, and we feel we are planting seeds in a great community,” she said via email. “We continue to work with the city on the many requirements of a plant this size, both in job creation and in the structural and utility needs of this project.”

Mark Sailer, engineering director with KLN, said working with Delano has been “a great experience to date.” The western Minnesota city is “very progressive-minded and willing to work together to find solutions,” he said.

Between its pet food and candy facilities, KLN counts about one million square feet of production space, Charlie Nelson says.

The company is in the process of funding a full-time service dog for the hospital, he notes.