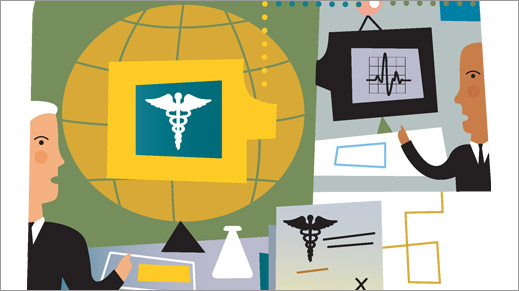 On the (Electronic Medical) Records

Minnesota medical providers are leading the nation in the transition to electronic medical records.
By TCB Staff
October 11, 2009

To VCRs and phones with cords, add this: color-tabbed folders at the doctor’s office. Because in Minnesota, at least, paper medical records are rapidly becoming a thing of the past.

Replacing the paper-laden folder is an electronic medical record (EMR). On the surface, the change seems inconsequential. Instead of using pens and paper, doctors and nurses use keyboards and computer files, and the information they record is the same. “But once medical staff start using EMRs, they never want to see paper again,” says Eric Westberg, a doctor with Glacial Ridge Health System in Glenwood, which adopted EMRs in 2007.

EMRs clearly improve patient care—and that, Westberg says, is why EMRs are here to stay. Paul Kleeberg, a physician who was heavily involved in the system-wide switch to EMRs at Minneapolis-based Allina Hospitals and Clinics, says that with a patient’s EMR readily available in every clinic and hospital room, “doctors and nurses have to spend a whole lot less time looking for vital information, which is especially important when seeing a patient for the first time or in an emergency situation.” EMRs also reduce prescription errors based on bad handwriting. And when doctors fill out a prescription electronically, the EMR program automatically relates it to the rest of the patient’s record and alerts the doctor to any potential misdosing, allergy, or medication interactions.

For Kevin Pallatao, vice president for patient care systems at HealthPartners, the benefit of EMRs goes beyond better patient care. “Patients typically retain about 20 percent of what they hear in an exam room,” he says. “By having access to their own records on line, along with easy-to-understand explanations of the information in the records, they can participate a lot more in their own care.”

“My patients love the fact that I can [pull up] their x-rays in any part of the clinic,” Westberg says. And if patients see another doctor in that system, they don’t have to remember every detail of their medical history or lug around copies of paper records.

Health care providers also directly benefit from EMRs. Reports don’t pile up and clog a records-retrieval system, and when doctors and nurses enter data directly into an EMR, they eliminate transcription errors. They also save a lot of money. Pallatao estimates that since 2005, when HealthPartners’ lab communications went paperless, the company has saved around $4.2 million in postage and other expenses related to sending out results on paper.

James Welters, the chief medical officer at Northwest Family Physicians, estimates that eliminating transcription costs made up for the expense of installing an EMR system at his three clinics in the northwest metro area. Joanne Sunquist, chief information officer at Minneapolis-based Hennepin County Medical Center, notes that when EMR systems are streamlined with a billing system, health care providers are much more likely to get paid for all the work they do.

EMRs also allow for smarter use of expensive tests such as MRIs and CT scans. By having programs that automatically track such tests and the reasons they are ordered, doctors get recommendations from the program when they are ordering tests, says Pallatao, who estimates that HealthPartners saved nearly $6.6 million in 2007 by reducing the number of unnecessary tests.

But what about safety and privacy? Pallatao and Susan Heichert, senior vice president of information services for Allina, both claim that the EMRs in their systems are more secure than paper records. The systems have several layers of firewalls, encryption, and password protection, and they can trace the origin of any use of the system. The privacy of EMRs in Minnesota are governed by the same laws that regulate paper records, which basically means that no one can access a record without patient permission, except in an emergency.

Given all of their benefits, why isn’t every health care provider using EMRs?

The answer is cost. The big health care providers in Minnesota, which are either paperless or well on their way to comprehensive EMR systems, had either deep pockets or access to financing or both. And they did spend money. Heichert estimates that Allina spent around $250 million to switch from paper records to EMRs. North Memorial Health Care’s tab was $60 million, and HealthPartners spent close to $70 million. The cost for Hennepin County Medical Center, one of the largest hospitals in the state, was approximately $68 million.

The price of an EMR switchover is much lower for smaller health care providers, but no less daunting in proportion to their limited resources. Rural hospitals need at least $1 million for a comprehensive EMR system, estimates Angie Franks, senior vice president at Healthland, a company that sells information systems to small hospitals, clinics, and other health care facilities. Welters says that it cost about $250,000 to make the three clinics of Northwest Family Physicians paperless.

Despite those financial incentives to sit out the digital revolution, no providers in Minnesota’s medical community are standing still. They want the benefits that come with EMRs, and according to Heichert and Welters, they know that more and more young doctors and nurses won’t interview at clinics and hospitals that use paper records.

Government is also putting pressure on paper-laden health care providers. In 2007, the Minnesota legislature mandated that all health care providers have interoperable electronic health records by 2015, although it didn’t stipulate any penalties for non-compliance. The federal government, on the other hand, has recently come up with a pair of incentives to adopt EMR technology. At least $18 billion of the stimulus package passed in February 2009 will cover incentives of up to $44,000 per facility paid out between 2011 and 2014 to hospitals and clinics that “meaningfully use” electronic technology. But in 2015, the government will begin paying less than standard Medicare and Medicaid rates to those that haven’t met the “meaningful use” benchmark. “Meaningful use” has not yet been defined, but Marty LaVenture, the director of the Center for Health Informatics at the state’s Department of Health, expects that by 2015, the federal government will require that nearly all current EMR systems contain prescription systems, lab ordering and reporting, immunization records, clinical summaries, easy patient access, data collection capacity for public health agencies, and exchangeable information. 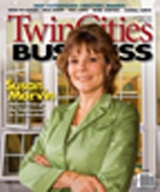 Minnesota in the Lead

Minnesota is far ahead of the rest of the country when it comes to EMR implementation. Every large hospital in the state either has a comprehensive EMR system or is on track to complete one by 2011. In contrast, only 1.5 percent of hospitals in the country had comprehensive electronic record systems in April 2009, and fewer than 10 percent were even on their way to such a goal. Research conducted in 2007 by Bloomington-based Stratis Health, a non-profit health care quality improvement company, showed that 62 percent of adult primary care clinics in the state either had or were implementing comprehensive EMR systems. No firm numbers exist for the rest of the country, but reports suggest that nationwide, less than 25 percent of all clinics are paperless.

Why is Minnesota ahead of the rest of the country? “It’s a tradition in the Minnesota medical community to be on the forefront of health care innovation,” says Michael Ubl, executive director of the Minnesota Health Information Exchange, a partnership of public and private health care organizations that share health information. Its goal is to increase patient safety and provider efficiency, and reduce administrative costs.

LaVenture echoes the cooperation theme. Since 2004, the state has sponsored a yearly “e-health summit” that brings together more than 400 leaders from Minnesota’s health care community for presentations, seminars, and discussions about the interface between the medical world and information technology. According to Taffe, the summit works: “There’s fierce competition for the health care dollar in Minnesota, but we’ve all essentially agreed to help each other as much as possible on IT issues.” LaVenture agrees: “The challenges are simply too great for any one provider to meet, so the participants share everything, and most of the material is made available on the Web.”

The first priority for LaVenture and just about every health care provider is to get all of Minnesota’s medical providers up to government-mandated speed by 2015.

Rural health facilities face the biggest challenges because they don’t have IT departments or a lot of capital. “Many of them,” Franks says, “only see an IT professional once every two weeks, if at all,” and none have a spare $1 million to make a small hospital paperlesss.

Fortunately, rural health care providers have new tools to adopt EMR. Stimulus money is an attractive new source of financing, Franks says, especially since at least 60 percent of rural patients are on Medicare, as opposed to 30 percent of patients in a typical urban or suburban setting. The state also has several programs that provide information, guidance, loans, and grants for switching to EMRs. And since most rural health care providers run hospitals, clinics, and long-term care facilities as one system, their record systems are integrated, eliminating a significant hurdle to a comprehensive EMR system. According to Franks, increased demand for EMR systems from rural health care providers has also increased competition for that business, leading to lower costs. Jennifer Lundblad, CEO of Stratis Health, is optimistic: She anticipates that close to 100 percent of hospitals and clinics in Minnesota will meet the state and federal governments’ 2015 deadlines.

But what about after that? “The next big task is information transferability,” Ubl says. He means that any health care provider with Internet access, security codes, and a patient’s permission can access that patient’s medical records. Minnesota is home to many networks that can share electronic medical information, Ubl says, but most are limited to health care providers in one region or facilities that use the same software. “My goal for 2015 is to have at least 80 percent of EMR systems in Minnesota able to communicate with each other,” he says.

A more mundane future facing all EMR users is the constant challenge to upgrade and improve their systems. In addition to managing the usual updates to keep software running well, users of electronic medical records need to constantly communicate with each other and the software company so that programs become more user-friendly and help all caregivers improve patient care. EMR users will also have to learn how to balance improving a system and keeping users proficient. According to Kleeberg, a lot of changes in a short period of time only lead to confusion among the users, and that inevitably leads to poorer patient care.

What else? No one really knows, just like no one is sure how information technology will change any industry. One thing, at least, is clear: In Minnesota’s not-too-distant medical world, it will be hard to find paper.