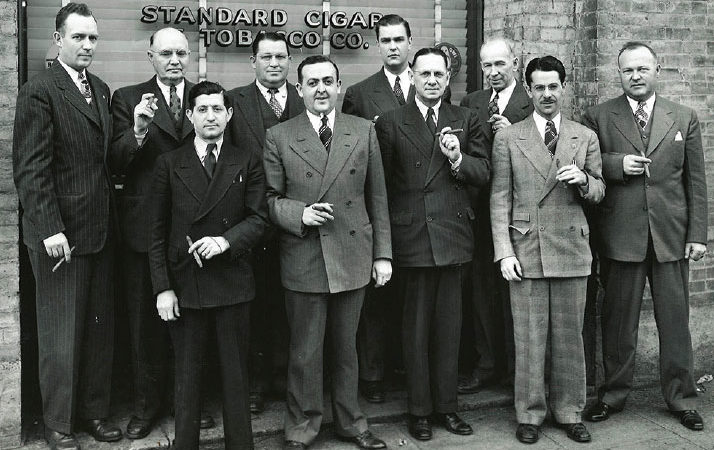 Of Cigars and Full Circles

Inside the iconic warehouse that connects my family’s history to a North Loop landmark.
By Allison Kaplan
October 02, 2018

My grandfather, Bernard Slater, didn’t live long enough to meet his four grandchildren, but his presence looms large in our family, and so we’ve always hung on every story, every photo. There’s the one of George Mikan (aka Mr. Basketball) pretending to hold my grandpa in a headlock. The one of him with Grandma Esther in Cuba, looking tan and natty. There are several photos of him near a boxing ring—I know that he loved the sport almost as much as he loved my grandma. His nickname was Bookie (although my mother insists he didn’t gamble). He smoked five cigars a day. And he was a natural-born salesman who, as the story goes, persuaded liquor tycoon Jay Phillips to sell him a tobacco wholesaling business with a handshake and a promise to pay him back—which he did.

My grandpa grew up in North Minneapolis, the youngest of seven. He worked as a newsboy and dropped out of school after ninth grade to help the family. He once won the newsboy boxing championship. He probably would have pursued boxing, but, as he told the Minneapolis Morning Tribune in 1956, “I didn’t weigh 100 pounds soaking wet with my clothes on, so I decided to take up boxing as a hobby.” They called him the “PhD of Boxing,” and he provided color commentary on TV and radio. The headline of that Tribune story, which is framed on my office wall: “He chews his cigars, but he’s an expert on rings.”

After marrying my grandmother in 1929, he opened Bookie’s Smoke Shop just north of downtown Minneapolis. Grandma Esther made cherry phosphates at the ice cream counter. When their two daughters—my aunt and mom—were born, and my grandma started working at home rather than at the smoke shop, my grandfather moved on to wholesaling. He worked for Phillips, whose businesses included tobacco and sundries as well as liquor, but he aspired to be more than a salesman. He soon became the owner of Standard Cigar & Tobacco.

I’ve long known that my grandpa’s company was housed in the historic Colonial Warehouse on North Third Street, which is now home to the crown jewel of independent retail, MartinPatrick 3. As I walk through the happening neighborhood we now call the North Loop, marveling at its evolution just in the last few years, I often try to imagine what it was like back in Bookie Slater’s day. Man, I would have loved to ask him about his old stomping ground over drinks at the Monte Carlo. He ate there every day.

Having covered retail in this town for many years, I don’t need to count articles to tell you that MartinPatrick 3 makes news almost as often as Mall of America does. If you haven’t been to the store, which specializes in high-end men’s apparel, along with home furnishings, go. You don’t need to be a shopper to appreciate the immersive experience Greg Walsh and his team have created, with surprises around every corner. It’s the epitome of the modern-day reality that stores need to become interactive destinations to compete with the internet.

Just when I think we can’t possibly write about MartinPatrick 3 again, its owners do something unexpected, like create an in-store shop for venerable Nicollet Mall jewelry store, JB Hudson, as we reported last month. In this issue, we take you to MartinPatrick 3’s newly expanded barber shop, Marty’s, which is fast becoming the hotspot for heavy hitters to get a cut and shave. As TCB was finishing that story, my mother happened to be cleaning out her basement. Among the old photos she uncovered was the visual I’d long imagined: my grandfather, cigar in hand, in front of the Colonial Warehouse building I’ve visited so many times. Back then, in the late 1940s and 1950s, the familiar shop windows featured the Standard Cigar & Tobacco logo in boxy, drop-shadow letters. One photo shows my grandfather flanked by his salesmen, dapper gents in suits and ties (very MartinPatrick 3).

I shared the photos with Walsh. He recognized the interior windows of the Standard Cigar warehouse. They were still there, though they had been under sheetrock until MartinPatrick 3 transformed the first-floor space that, through the years, housed a row of antiques stores and a music school, among other businesses.

I like to think that’s my grandpa’s spirit, living on in the North Loop.