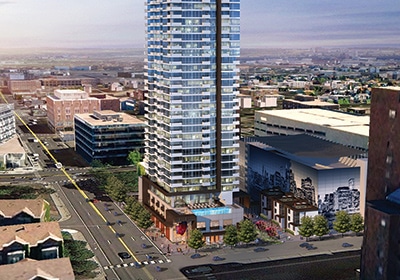 The Nicollet Island-East Bank Neighborhood Association not only embraces density, it demands it.
February 01, 2015

When a developer came to the Nicollet Island-East Bank Neighborhood Association (NIEBNA) with a plan to build hundreds of residential units on the vacant, contaminated Superior Plating site, it should have been a slam-dunk. But the association pushed back—it wasn’t dense enough. In a city where neighborhood groups regularly fight large buildings over shade or parking concerns, NIEBNA is seeking density at levels unseen outside the downtown core.

That choosiness led to a new developer, Lennar, which was willing to put the same number of residents in a high-rise surrounded by low-rise retail on half of the Superior parcel.

And it’s only one of several density-rich projects in the pipeline.

The area is hot because of its proximity to downtown, its riverfront setting and a hip commercial district, according to Grambsch. But he notes an economic basis for NIEBNA’s aggressive stance. “We’ve invested a lot of capital into the infrastructure of the neighborhood,” he says. “So it’s fiscally responsible to spread that out among as many people as possible.”

The vision is not without growing pains, which came to the fore after Rob and Tony Jacob, owners of neighborhood institution Nye’s Polonaise Room, announced they planned to close the business to redevelop the site. In a time of declining bar revenues and rising land values, finding a more lucrative use only made sense, they say.

If change is inevitable, other long-time businesses may be on the bubble. “I think Surdyk’s is next,” Grambsch says of the liquor-store icon on a suburban-style lot. “I love the store, but the wine and liquor market is different now that Total Wine is in the Twin Cities. Selling that land could provide a pretty comfortable retirement.” He thinks Kramarczuk’s may face a similar dilemma.

Third Ward Councilman Jacob Frey supports more density, but stresses that “growth of the area and retention of character are not [mutually] exclusive,” and that pushing for good architecture is key. Though he called Nye’s closing a “punch in the gut,” and is trying to find a way to preserve parts of it, he said he’s not planning on blocking the wrecking ball should it come to that.

Grambsch sees this part of Northeast as downtown’s parlor: “If the Superior Plating site succeeds, I expect this entire area will be much more urban and thriving in five to 10 years.”