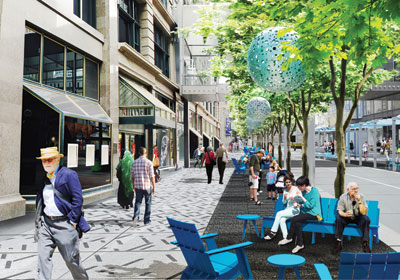 Downtown Minneapolis boosters tout the future look and feel of the Nicollet Mall, once its $50 million overhaul is complete. But many business operators in the corridor are exasperated with the ongoing disruption and loss of sales.

“It’s been a tough time,” says Shane Higgins, general manager of Brit’s Pub, which has been a mall fixture since 1990. Higgins says that the biggest sting has been the lack of patio seating in front of the bar on the mall.

“We have seating for 100 people outside,” says Higgins. Without those customers, he says, Brit’s did not need as many employees during the 2016 season. “It probably cost eight or nine people jobs this summer.”

The mall was closed in July 2015 when a year-plus in underground utility work began; the schedule calls for the project to be substantially complete by fall 2017. But some cosmetic “final touches” including landscaping will be done in early 2018, according to Sarah McKenzie, a spokeswoman for the city.

“There’s been a big effect on business,” says Brad Schwichtenberg, general manager of the Newsroom, another bar and restaurant on the southern stretch of the mall. “It’s definitely been a major decrease in foot traffic.”

Schwichtenberg says that some customers are confused about access, so they simply avoid the mall altogether. He declined to estimate lost sales.

There have been several restaurant closings along the mall since the project’s start, though none have publicly blamed the construction: Masa, Vincent, Ling & Louie’s, Ichiban Japanese Steakhouse & Sushi Bar and a Dunn Brothers coffee shop; a Five Guys has opened. Macy’s is leaving in March and Barnes & Noble is closing in spring.

Though very few of the departures have been directly connected to the mall renovation, businesses seem to be using lease expirations and the like to opt-out.

As he looks out on the mall from his men’s apparel store in the IDS Center, business owner Bob White of Hubert White says that much of the time he doesn’t see renovation work happening. “The process seems to be unbelievably slow,” says White. “The frustration is that we don’t see any activity and there’s no sense of urgency. So far as I know . . . no deadline has ever been met.”

White says that business remains solid during the week because the majority of his customers work downtown. But weekends are a different story. “It’s definitely had a negative effect. Particularly the Saturdays when either the visitor or the resident who would be walking around is not doing that,” says White. “I would say Saturday business is down at least 20 percent.”

The prospect of the Macy’s space across the street being vacant and under redevelopment for an indefinite period will inevitably affect the Mall’s vibrancy well beyond the end of the renovation. “I think that it’s a fantastic opportunity to get a fresh start . . . That’s the upside,” says White. “The downside is it’s going to take years for the new owners to come up with a plan for the building and get the appropriate tenants. They’ve got a lot of work to do.”