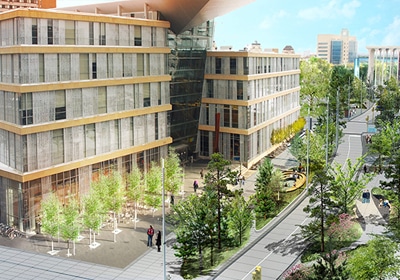 The project swaps out pavers for concrete after a sole bid came in $24 million over budget.
February 21, 2016

A redesign of Nicollet Mall was introduced Wednesday with several changes that the city believes would cut costs and entice more contractors to bid on the $50 million project.

After receiving a single bid in December that was $24 million above its construction budget, Minneapolis opted for poured concrete over initial plans for concrete pavers.

James Corner, whose New York City-based firm James Corner Field Operations is leading the redesign, told the Star Tribune, “We decided that rather than trying to cut a little bit out of everything…we’d pick one thing that we thought would be the drastic cut. And that was the paving surface.”

Corner is concerned the poured concrete could “result in a monolithic look,” but if the workers pouring the slabs add texture and use several different gray tones, the result could still look refined.

Additionally, to free up another $4 million, the city will push the costs to build a dozen transit shelters onto Metro Transit.


Concerned parties say the sacrifice of the walkway’s look won’t reflect the “transformative” or “must-see destination” pitch they were originally given. City Council Member Lisa Goodman described it as a “bait and switch,” adding that it isn’t fair for the nearby property owners who are funding half the redesign’s cost.

A study from March of 2014 found the Nicollet Mall facelift could spur as much as $106 million in additional spending and create 860 jobs. The project’s redesign is expected to solicit new bids next month.