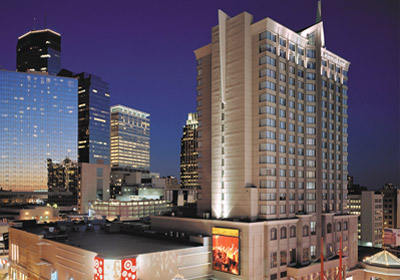 The Graves 601 is now called Loews Minneapolis Hotel and is planning a $7 million renovation; it also filled the former Bradstreet Craftshouse space with a new concept called Cask Cookhouse.
July 17, 2014

The former Graves 601 hotel in downtown Minneapolis went for $65 million, and the rebranded property is already undergoing changes.

Graves Hospitality announced in late May that it struck a deal to sell the downtown property to New York-based Loews Hotels & Resort, but it didn't disclose the sale price at the time.

New real estate filings show that the deal closed July 2, and the hotel sold for $65 million. The property has now been renamed the Loews Minneapolis Hotel, and Loews said Monday that it plans to invest about $7 million in renovations, beginning early next year.

The hotel has about 250 rooms, 21 floors, 20,000 square feet of meeting space, and multiple restaurants. Graves Hospitality is relocating its Bradstreet Craftshouse to Uptown Minneapolis, vacating its former home in the Graves 601. Loews has already filled Bradstreet's space with a new bar/restaurant called Cask Cookhouse, according to a Loews spokesperson. The restaurant is currently open for business.

Marketing materials describe the new concept as having “pre-prohibition aesthetics” where guests can enjoy craft cocktails and wine while watching chefs in an open kitchen prepare “gourmet plates” featuring “seasonal-fresh ingredients.” It appears to be focused on small plates and sandwiches. The current menu includes everything from tuna tartare to mac and cheese with lobster and truffle to a “chicken and waffle” sandwich, featuring crispy chicken, bourbon maple glaze, and bacon.

The Cosmos restaurant and champagne-focused bar RelevÃ©, which also existed under the Graves 601 banner, remain open, and the Loews spokesperson said no changes are planned for either of those concepts.

Loews has also replaced the Graves 601 logo on the building's exterior with temporary signage that reflects the hotel’s new name. The company plans to install permanent signage within about 45 days.

“The Loews Minneapolis is a great addition to the Loews portfolio,” Paul Whetsell, president and CEO of Loews Hotels & Resorts, said in a statement. “There are exciting new developments in Minneapolis including the Block E area, and having our hotel in such a key Midwestern destination is a tremendous plus for the growth of our brand. The property is in great physical condition, with the renovation targeted to further enhance the guest experience.”

When first announcing the sale of the hotel, Graves Hospitality founder Jim Graves said the transaction would allow his company to expand in other areas of its business. Graves owns more than 100 hotels and restaurants, as well as residential and commercial properties—and it recently opened a restaurant called Rival House in the DoubleTree hotel in downtown St. Paul.

The sale of the Graves 601 is “likely a record-setting transaction” based on the fact that it works out to $256,917 per room, according to Finance & Commerce, whose story is behind a paywall.