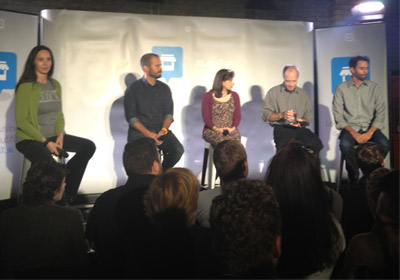 Each panelist echoed common entrepreneurial refrains, emphasizing “passion” and staying true to their original vision, whether that involved a commitment to high-quality products (as was the case for Anderson’s Dogwood and Dixit’s Hot Indian Foods) or giving back to the communities in which they operate (a focus of Smith’s Regla De Oro and Swenson-Klatt’s Butter Bakery).

But each entrepreneur also cited the myriad challenges they’ve encountered.

Anderson founded Dogwood three years ago after roasting coffee in his basement. During Thursday's event, he expressed concern about the increased expense of providing health care coverage to his workers, as well as the challenge of finding sufficient capital for continued expansion.

But Anderson also said Dogwood’s success has been built on strong relationships. For example, the company often collaborates with local design shops like Aesthetic Apparatus and Studio on Fire, and it recently expanded its distribution to include local Whole Foods stores.

Dixit launched Hot Indian Foods earlier this year after being laid off from General Mills, following a 15-year career at the Golden Valley-based company that spanned roles in venture capital and marketing. With a plan to introduce a “modern Indian food brand,” he saw a food truck as the perfect opportunity to experiment and gauge consumer interest prior to potentially expanding into packaged foods or a brick-and-mortar restaurant. He said a major turning point in launching his start-up was the moment he hired his chef, who left South Minneapolis’ Wise Acre Eatery to help make his vision a reality.

Smith and Swenson-Klatt, meanwhile, each detailed their recent (and difficult) decisions to move into new locations.

Smith started Regla De Oro after completing a workshop through local nonprofit WomenVenture, which she described as “really instrumental” in getting her business off the ground. She recently moved her shop two blocks down the street into a less-congested neighborhood and immediately saw positive results.

Swenson-Klatt, who opened Butter several years ago following a 20-year teaching career, said he’s experienced some growing pains but knew he’d made the right decision to expand when his business reached its fundraising goal on Kickstarter.

The Let’s Talk event was hosted by Square, a San Francisco-based technology company whose white device is plugged into smartphones and tablets, allowing merchants to accept credit card payments via mobile devices. Each of the event’s panelists, as well as many of the small-business owners in attendance, said they tap Square’s technology for their own operations.

The event concluded with a question-and-answer session, during which local entrepreneurs—ranging from a salon owner to a hardware store proprietor—looked to glean insight from the panelists regarding how to take their operations to the next level.

Below is a video recording of the complete panel discussion:

Square has also held Let's Talk events in other cities. Next, it heads to Toronto, Ontario; New Orleans, Louisiana; and the Bronx in New York.

Below are a series of photos from Minneapolis' Let's Talk event:

Entrepreneurs networking after the panel discussion