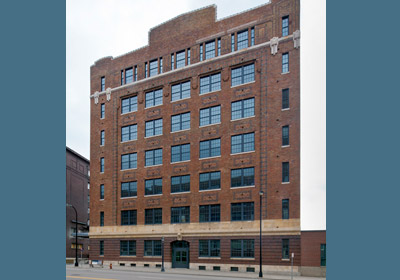 The North Loop area of downtown Minneapolis is booming with hip new restaurants, retailers, and apartment buildings. But it turns out that the neighborhood isn’t just for hipsters: It’s also becoming an increasingly attractive area for companies to lease office space.

Bloomington-based developer United Properties acquired the vacant, vintage building at 701 Washington Avenue North in July 2012. The building is now known as Loose-Wiles Building, a nod to its history as the former home of the Loose-Wiles Biscuit Company. After drawing nine new tenants to the building since the beginning of 2014, the property is now 94 percent leased.

New tenants include MarketingLab and Ovative/Group, which both leased approximately 10,000 square feet and provide marketing solutions to clients.

The first floor of Loose-Wiles Building is home to The Freehouse, a restaurant and brewpub operated by the St. Paul-based Blue Plate Restaurant Company. At this point, only 7,000 square feet of the 120,000-square-foot remains available for lease.

The largest tenant in the Loose-Wiles Building is RJM Construction, which occupies about 31,000 square feet of space. United Properties and RJM Construction are both part of Minneapolis-based Pohlad Family Companies, which also owns the Minnesota Twins and numerous other local businesses.

United Properties has been busy in the North Loop area, which is home to Target Field and offers close proximity to transit connections. The developer previously did an extensive overhaul of the historic Ford Center building, which is 99 percent leased. And United Properties is set to start work in July on a new 240,000-square-foot North Loop office building that will be the new home for the nonprofit National Marrow Donor Program/Be the Match. That building will open in late 2015.