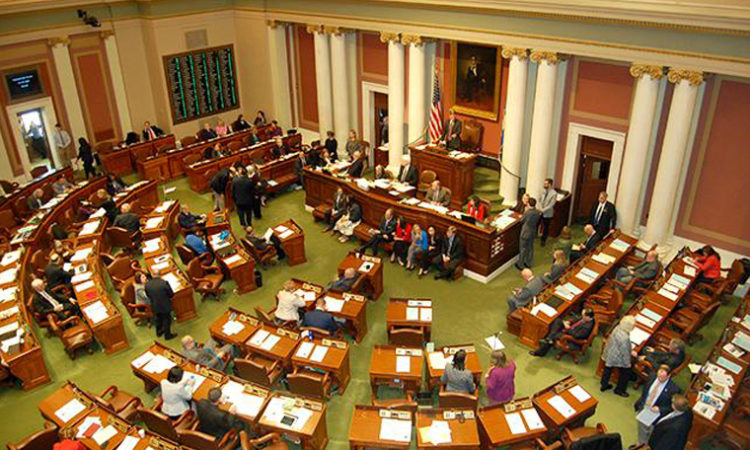 This year, 36 percent of candidates for Minnesota House running as of Thursday morning were women. ( Photo by Corey Anderson/MinnPost)

More Women (and Men, Too) are Running for the Minnesota House in 2018

The proportion of candidates for the Minnesota House who are women inched up one percentage point versus 2016.
By Greta Kaul
June 07, 2018

In many ways — the women’s marches, the fall of Harvey Weinstein and other powerful men accused of sexual misconduct, and in Minnesota, the resignation of male politicians for the same — it’s been a big year for women.

And women are running for seats in the Minnesota Legislature, which is often a first step for long careers in public office. Currently, Minnesota ranks 10th among states for its share of females in the Legislature, with one-third of the seats occupied by women, according to the Center for American Women and Politics at Rutgers University.

The state Senate isn’t up for re-election this year, and we won’t know until November whether more women are elected to the Minnesota House than have been in the past. But we do know how many women are running.

As of Thursday morning, 36 percent of the candidates running for Minnesota House this year are women (candidates may still withdraw before 5 p.m. Thursday, so these numbers may change). That’s compared to — drumroll, please — 35 percent back in June 2016, according to a MinnPost analysis of the filings, which used publicly available information about candidates to determine their gender. (For a full rundown of who’s running for the House, visit MinnPost’s handy candidate tracker.)

Women Winning, a Minnesota organization that promotes the candidacy of pro-choice women, saw a record number of women inquiring about running for office after the 2016 election, said Lauren Beecham, its executive director.

“The general sentiment is that after 2016, they learned a critical lesson that they can’t wait for another individual to step up and run for office,” she said.

That seems to be the case at the national level, too. On the left, women seem to have been energized after the election of President Donald Trump, said Kelly Dittmar, a Rutgers professor associated with the Center for American Women in Politics.

“The last election was motivating because I think it created a sense of urgency that people like them who had beliefs like them needed to be at the table … particularly Democrats who felt that a Republican administration and a Republican Congress might put into jeopardy some of the policy advancement they had seen,” Dittmar said.

Trump may be energizing women on the right, too. “Those who are in line with Trump, you might see them using messages like (that) he proved outsiders could be successful, he’s not politically correct — sort of motivating women who many not have otherwise thought” of running for office, she said.

Jennifer DeJournett, the president and co-founder of VOICES of Conservative Women, a Minnesota organization that works to support conservative women running for office, said on the Republican side, the number of women candidates is increasing because  “people acknowledge that if (you) are going to have your values and your issues represented across the state and the country, we need to make sure that everybody’s at the table so that everybody’s voices are heard and your campaign is stronger.”

DeJournett, a member of the Three Rivers Park District Board of Commissioners, said that when she first ran for the office six years ago, people often asked how she could find the time to do it with three small kids — or marveled that her husband allowed her to run. Now, they ask such questions much more timidly.

“Who can represent my demographic better than someone who’s living the life?” she said.

But whatever the reason for an increase in women candidates, it’s not just more women who seem to be more motivated to run for office this year.

Nationally, “(The) increase in women candidates is paired with an increase in men this cycle,” Dittmar said. While there has been a bit of growth in the share of candidates who are women, “women are still underrepresented overall, and I think that tells a little bit about the story — yes, progress for women, but we still have a lot of room to grow.”

That’s not entirely surprising to DeJournett. The left, she said, tends to be better at making sure women are trained and prepared, but she contends that the mismatch between the number of Republican and Democrat women running — or elected — isn’t good for anyone.

Women, she said, are more apt to work collaboratively, and when women on the DFL side don’t have women to negotiate with on the Republican side, that hurts everyone.

Among her friends on the left and the right, she finds, even when they don’t agree, women tend to acknowledge common ground and bounce ideas off one another. “I think women tend to collaborate and work together,” she said.

They’re running, but can they win?

More women are running for the Minnesota House this year than in 2016, which has the potential to result in more women elected to office.

But can they win?

In a May analysis, the New York Times found that on the Democratic side, women were running for Congress at record levels — but that most of the women who had won congressional primaries were running in safe Republican seats, many against a sitting Congress member running for re-election.

MinnPost found a similar phenomenon in House filings in Minnesota: Compared to 39 percent of DFL men, 47 percent of DFL women are running in districts this year that are held by Republicans and went Republican by 10 percentage points or more in 2016.

But in light of the energy coming from women candidates, she said, another factor this time around might be that some women running in longshot races are more concerned about challenging the status quo than they are about winning.

“There are at least a contingent of Democratic women running this cycle who are not running because they have strategically mapped out the best seat for them,” Dittmar said. “Instead, they’re running because they’re particularly motivated in this moment to stand up to the incumbent and the party in power, regardless of whether they have a high chance in the fall.”

That might have to do with that there are fewer Republican women overall (and currently, fewer Democratic incumbents in a Republican-controlled House), or it might hint that Republican women are running in more competitive districts.

Only time will tell whether Minnesotans make the opportunity to elect more women to the House a reality. Barriers — both internal and external — remain.

On a personal level, Dittmar said, research shows women are more likely than men to consider how their candidacy, or how holding elected office, would affect their families.

In some ways, politics have advanced, and some of the external barriers that made running for and winning elected office for women have diminished, she said. But stereotypes about women, double standards, and assumptions about their qualifications to run for office can still be a hindrance to their success. Research has also found voters seek more information about women candidates than they do about men to be assured they’re qualified to do the job.

“Women often have to, in a way that men don’t have to, balance these sets of expectations that are associated with candidacy or officeholding,” she said.

Amy Juang contributed to this report.